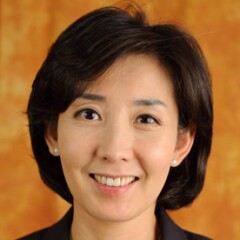 She is a member of the Liberty Korea Party. She was elected as chair of the Foreign Affairs and Unification Committee in the 19th National Assembly for the first time as a female lawmaker in the country’s history. Also, she is a former leading member for the Grand National Party in Culture, Sports, Tourism, Broadcasting and Communications Committee, and Attorney-at-Law.

She is the Co-representative of Korea Parents Association for the Disabled, and a Chairperson for Special Olympics Korea. Additionally, she serves as an advisor for the Korea Down Syndrome Society, and a Chairperson for the Members' Study Group "We Can" on the Physically and Mentally Challenged Children for the National Assembly of Korea. She holds a doctorate in International Law from Seoul National University.