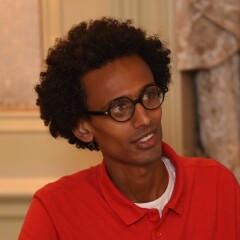 Youssef Ramadan is 33 years old. He spent most of his life determined to show the world that people with intellectual disabilities are capable of anything and everything. As a young boy, Youssef saw his friends beaten and bullied, then he himself was beaten and bullied just because they were perceived as ‘different’. In his early years, he had trouble talking, which made him shy and took away his self-confidence. Even his parents refused to tell anyone that he had a disability, to avoid society’s lack of acceptance. Yet, instead of giving up, this aspiring change-maker tirelessly trained as a Special Olympics handball and basketball athlete. He set out to prove that people with intellectual disabilities are capable of anything.

He became a Special Olympics assistant coach. He has worked at a multinational company since 2007 where he worked in various roles within the organization, from archiving, to insurance, payroll, database, and supply chain. He now leads a team of 25 people with intellectual disabilities.

Starting in 2021 and for four consecutive years, Youssef will serve his term working with the Global Athlete Leadership Council and train more athletes to become leaders like himself. At the beginning of this year, he became a member of the Games Management System (GMS) committee in Special Olympics Egypt.