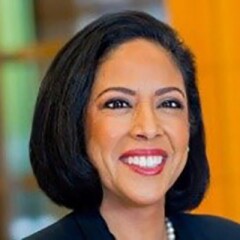 As one of the world’s top experts on women’s leadership and youth development, Anna María is a dedicated advocate for helping others reach their full potential. As Chief Impact Officer of Encantos, she is responsible for leading the company’s education and philanthropic initiatives including strategic partnerships, corporate and public affairs, and community engagement. She also serves as President of Encantos' newly formed philanthropic arm Encantos.org, which focuses on advancing the importance of 21st century learning, literacy, and life skills for children through the development of research, programs and fellowships with future plans to target larger public policy issues pertaining to the ‘homework gap’ and technology connectivity issues in education.

Prior to Encantos, Anna served as the CEO of the National School Boards Association, a nonprofit representing 51 million public school students. She was also the first woman of color to lead the Girl Scouts of the USA, helping to revitalize the organization for the 21st century.

Chávez was named one of FORTUNE’s World’s Greatest Leaders (2016) and honored as one of the most creative people in business by Fast Company (2014). In 2021, Forbes Magazine named her one of the top 50 Over 50 Women leaders in the U.S. During her time as CEO of the Girl Scouts, she was inducted into the U.S. News & World Report’s STEM Leadership Hall of Fame. Chávez has appeared on top national news outlets including ABC News, CBS News, NBC’s The Today Show, FOX News Channel, CNBC, CNN, PBS, Bloomberg Radio, Telemundo, Univision and NPR. She earned a bachelor's degree from Yale University and a juris doctorate at the James E. Rogers College of Law at the University of Arizona. She has been admitted to the Bar of the U.S. District Court for the District of Arizona, the Arizona Supreme Court and the U.S. Supreme Court.