Eunice Kennedy Shriver dedicated herself to the cause of intellectual disability early on, at a time when the nation didn't devote a second's thought to people with intellectual disabilities, some thought they should be locked up in dark rooms and some were frightened and intimidated by them. But mostly, nobody cared.

Of the hundreds of thousands of words, phrases, sentences, paragraphs and entire volumes that Eunice has said or written about people with intellectual disabilities, one resonates: "A salvaged life."

She said that once to elucidate the once-revolutionary idea that the lives of those with intellectually disablility could actually be something other than a dreary slow dance from birth to death. A salvaged life.

It haunted Eunice--indeed, the entire Kennedy family--that sister Rosemary, the third child of Joseph and Rose Kennedy, lived a life that went partly unsalvaged. Rosemary was born in 1919 with "mental retardation," as it was called at the time.

Rosemary was not the entire reason that Eunice became involved in the cause of persons with intellectual disability, but it was a major reason. In 1946, her father established the Joseph P. Kennedy Jr. Foundation as a memorial to older brother Joe, who was killed in World War II. Eunice now had a cause and resources. "Not a single private foundation was then devoting its money to mental retardation," Eunice wrote in the Sept. 22, 1962 edition of The Saturday Evening Post. 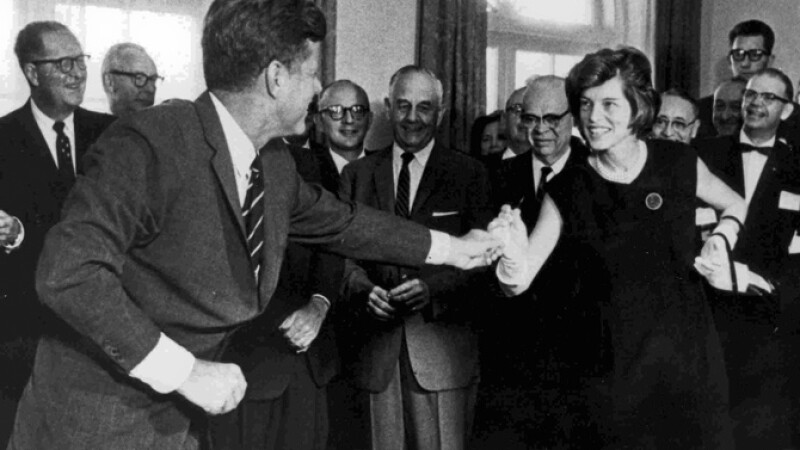 Eunice Kennedy Shriver receives a pen from U.S. President John Kennedy, her brother, following his signing in 1961 of a bill she championed that formed the first President's Committee on Mental Retardation. 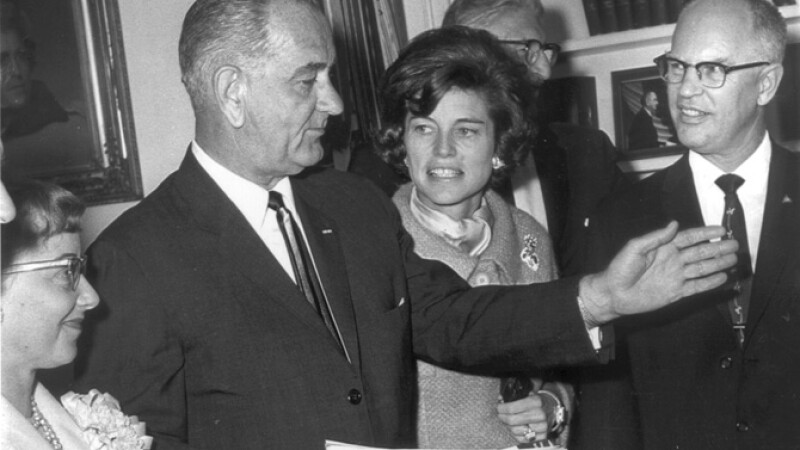 Eunice advised U.S. President Lyndon Johnson in her role with the President's Committee on Mental Retardation in 1964. 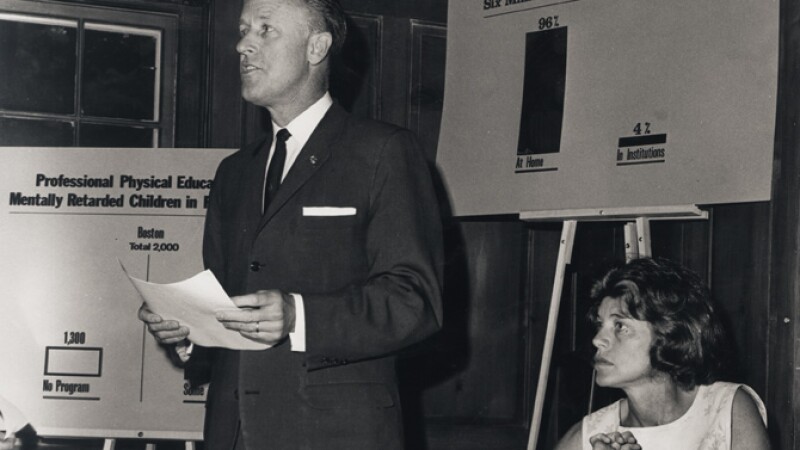 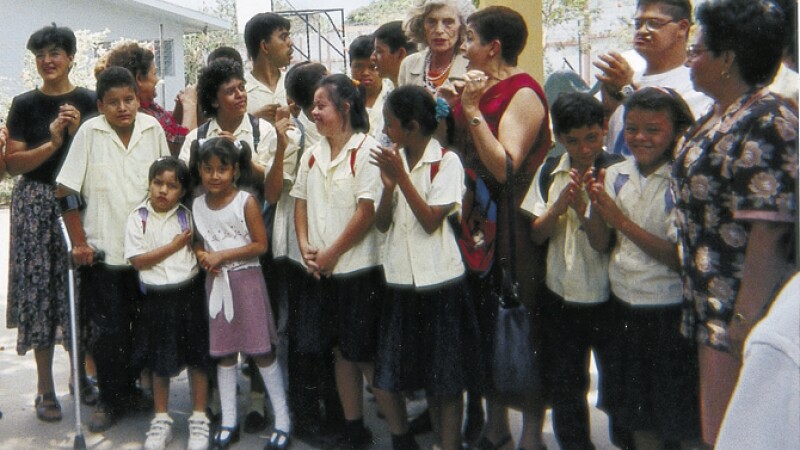 In April 1999 following the devastating floods and evacuations as a result of Hurricane Mitch, Eunice accepts an invitation from President Carlos Flores to see rebuilding efforts and while in Honduras took time to meet with students and teachers at a special school in San Pedro Sula. 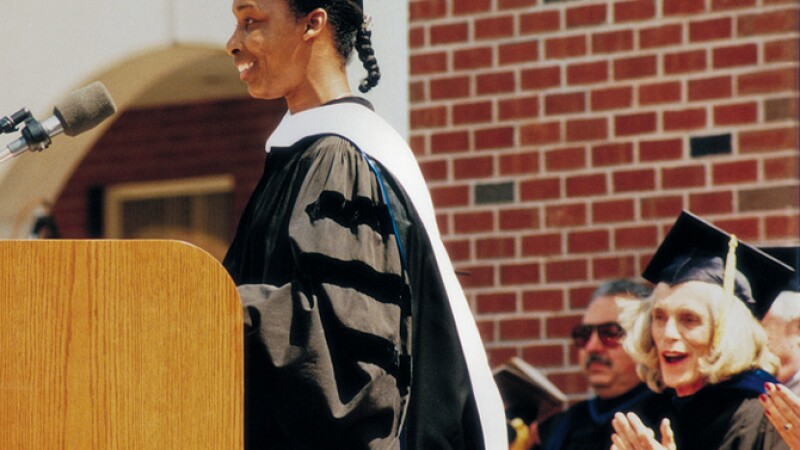 Eunice encouraged and then proudly cheered Special Olympics athlete Loretta Claiborne as she accepts an Honorary Doctorate of Humanities from Quinnipiac University in Connecticut, becoming the first person with intellectual disabilities to receive such an honor. 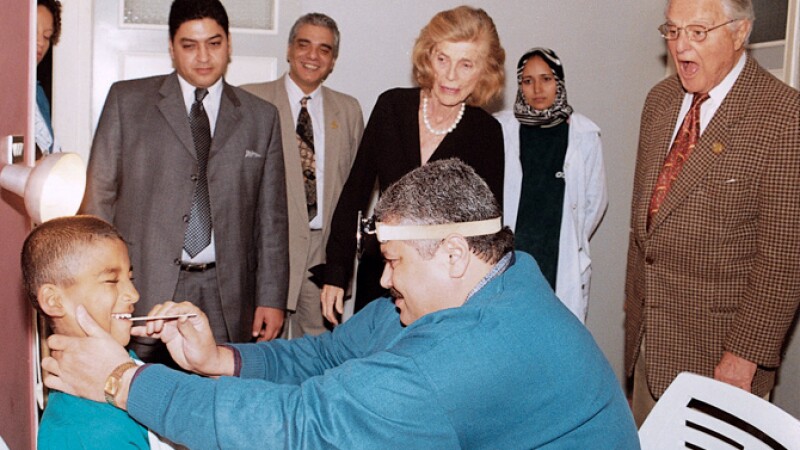 Eunice watches an athlete in Cairo, Egypt, receive a dental screening, part of a suite of free medical screenings provided by the Healthy Athletes program of Special Olympics. After a doctor proposed the program, Eunice enthusiastically supported its growth. 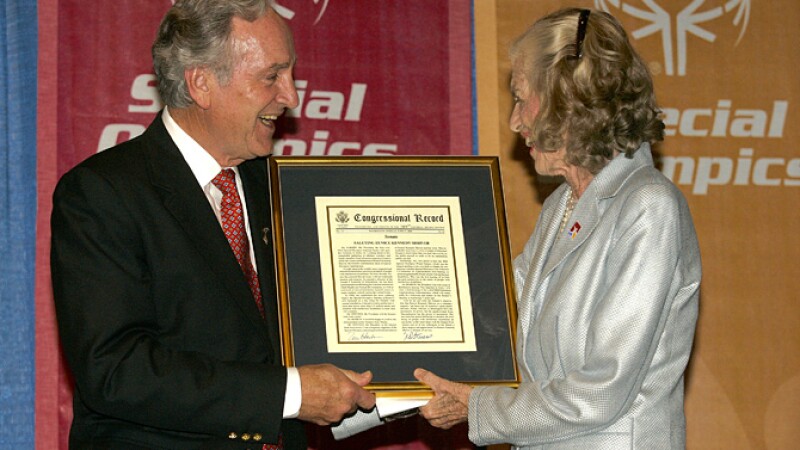 A frequent--and extremely persuasive--visitor to the United States Congress, Eunice thanks U.S. Senator Tom Harkin of Iowa, Chair of the Health and Human Services Committee, for his ongoing advocacy on behalf of people with intellectual disabilities. 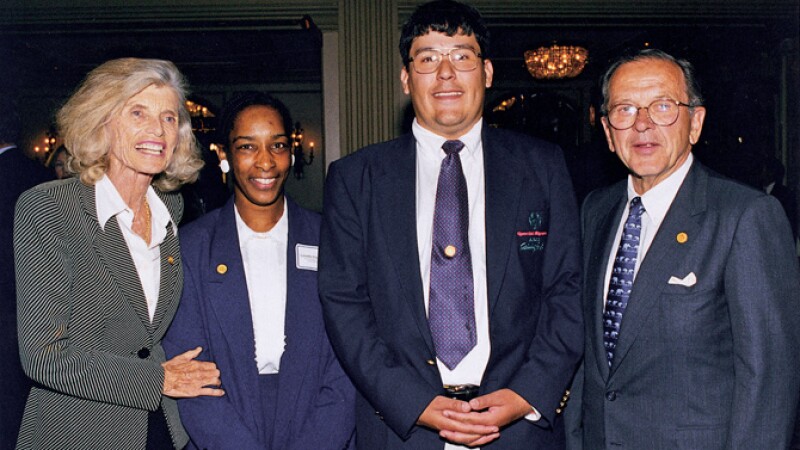 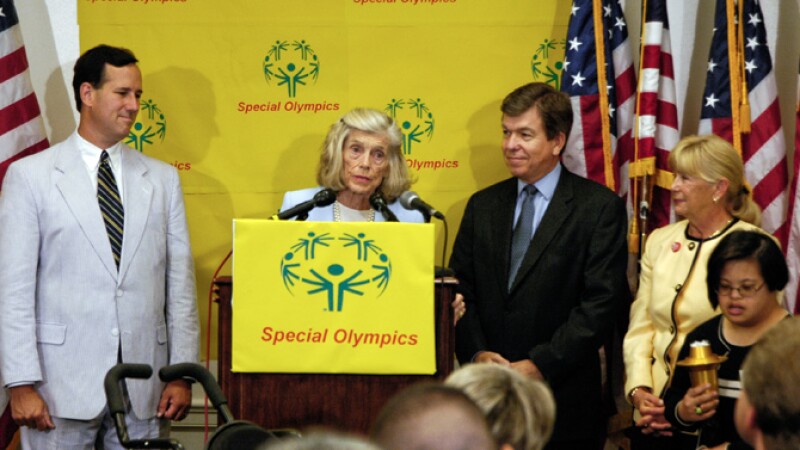 Co-sponsors Senator Rick Santorum and Congressman Roy Blunt join Eunice for the announcement of the Special Olympics Sports and Empowerment Act of 2004, which authorized funding for its health screenings, education and the expansion of Special Olympics programs worldwide. 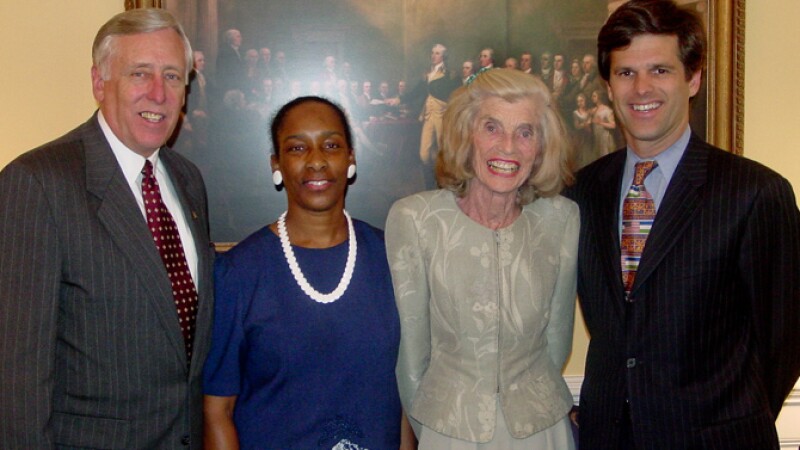 Eunice met frequently with Representative (far left) Steny Hoyer and other Congressional leaders on behalf of the Special Olympics Sports and Empowerment Act. Eunice's son, Tim Shriver, at right, is the Chairman of Special Olympics. 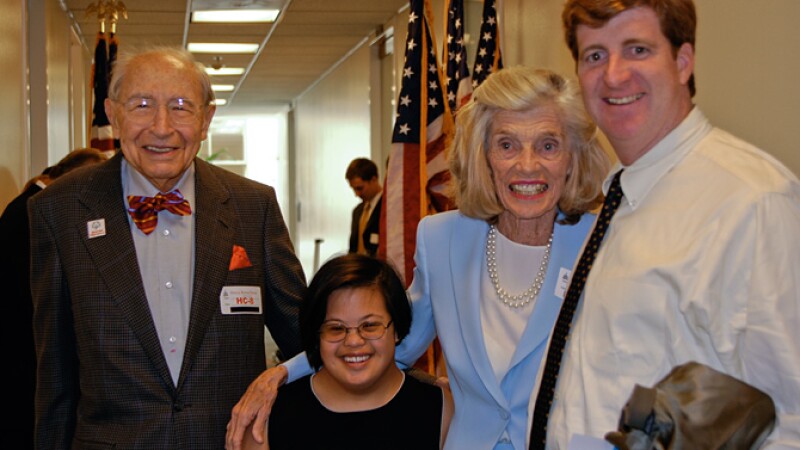 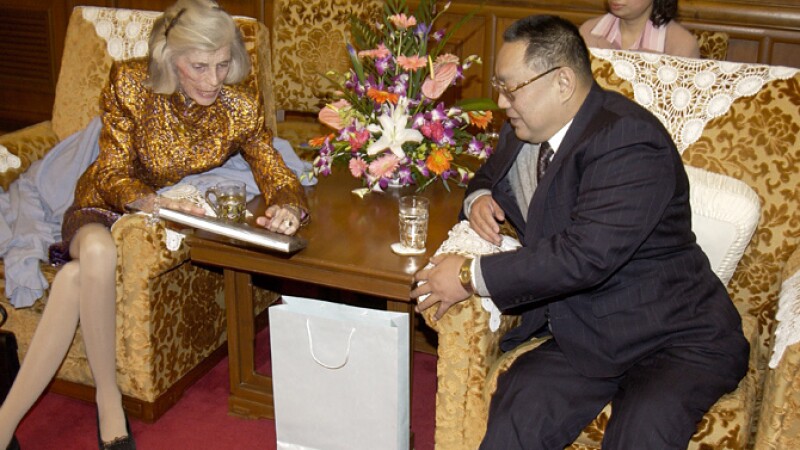 Eunice's passion for improving the lives of people with intellectual disability led her to meetings in 2004 with Deng Pufang, son of Chinese leader Deng Xiaoping and current President of the China Disabled Persons Federation. 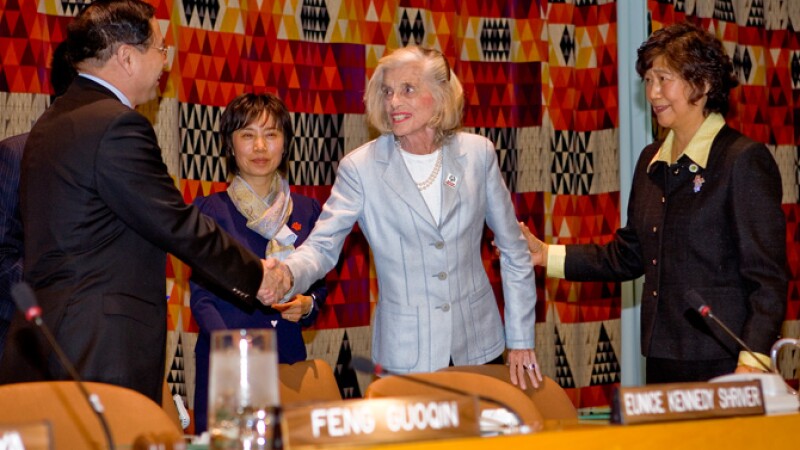 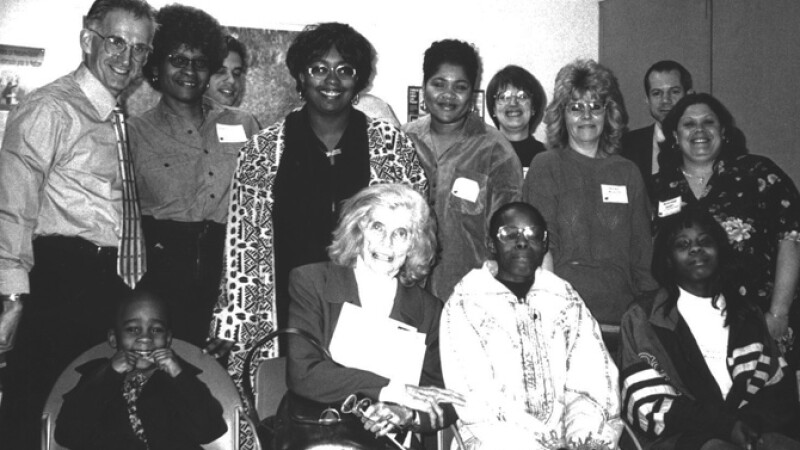 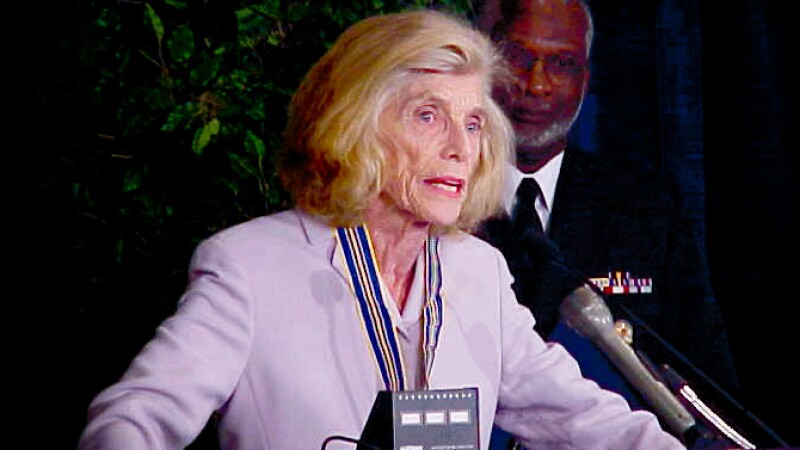 In 2001, Eunice speaks as part of the United States Surgeon General's presentation of "The Report on the Health Status of People with Intellectual Disabilities." 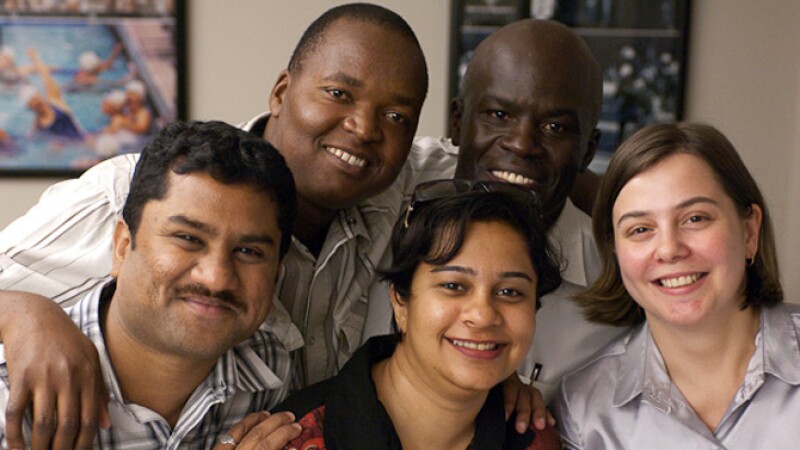 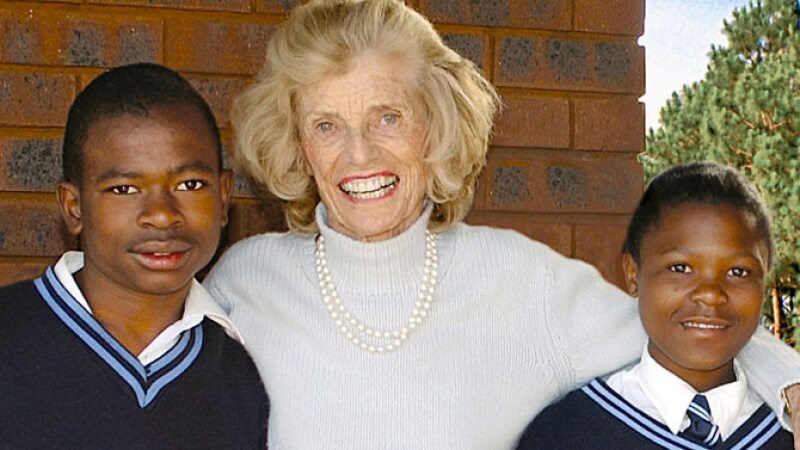 In four decades of advocacy, Eunice has inspired and built a worldwide movement of more than 3 million athletes with intellectual disabilities, with health care, education and sports opportunities. From Chicago to South Africa, Panama to China, Eunice continues to inspire.

The foundation began dedicating $1 million a year in awards and grants to advocate for people with intellectual disabilities, and the movement was off, if not running.

After that, Eunice began to take notice of changes that could be made. She visited a state institution where the smell of urine was overpowering and where the patients stood around with nothing to do, "like misshapen statues" in Eunice's memorable phrase. She began to hammer away at individual prejudices, the idea that the lives of individuals with intellectual disability should be by definition wasted ones.

Inspiring Others to Believe

Eunice was tireless in her efforts. Her passion and belief in the cause were so deep that others began to see her vision. As she worked, she began to discover that thousands of people, inspired by her and compelled by instincts similar to her own, were eager to befriend, educate and work with kids with intellectual disabilities.

Those were the kind of young people who would work at Camp Shriver in the 1960's and would help carry Eunice's message to a skeptical or uncaring nation. And, gradually, as working with people with intellectual disabilities became Eunice's cause, Eunice's cause became one of the nation's causes. And what happened was that "a salvaged life," something that didn't happen with Rosemary, became a thousand salvaged lives, and, over time, that became millions of salvaged lives.

Beyond her bulldog determination, one of the principal reasons that she was successful was her proclivity for plain speech. She looked like a Kennedy, talked like a Kennedy and had Kennedy resources. But her demeanor suggested a no-nonsense football coach or one of those tough nuns that Catholic school kids learn to appreciate 40 years after graduation.

Remember that these were blunter times, long before specialized, image-conscious language came into being. In an article she wrote for Parade early in 1964, Eunice began a story by referring to "the tragedy of mental retardation." That's not how mental-health advocates, nor Eunice herself, would refer to it today.

A Wake up Call

Eunice also attacked the "stupid and persistent superstitions" that surround the subject of intellectual disabilities. "Even today, many retarded are shut away, child and adult, in squalid institutions to waste their lives, staring blankly at the emptiness around them," Eunice wrote.

What she was doing was issuing a massive wakeup call. You don't do that by gently tapping one on the shoulder and offering to have a conversation; you do it by jabbing him in the ribs and stepping on a soapbox.

To get America interested in the subject, Eunice worked, as she had to, on our collective guilt.

"I recall institutions in wealthy states where adults and children existed in crowded, bleak, foul-smelling, barrack-like wards, their unwashed clothes and blankets in rags," she wrote. "I would never have believed that such conditions could exist in modern America, within sight of skyscrapers, suburbia and freeways glittering with cars."

That is vivid, no-holds-barred stuff. That it was coming from a member of a family with wealth and power was not lost on some of America. But how could she be criticized when she was out there walking the walk? She was the one stalking the institutions, smelling the foul conditions and telling America to stop hiding its eyes. Hers was no ivory-tower crusade.

But Eunice's great gift was showing the hope along with the misery. She spoke and wrote about facilities, such as the Southbury Training Center near Waterbury, Conn., that had a forward-looking philosophy for treatment.

She wrote of getting a transistor radio "put together by a 17-year-old retarded boy," and suggested that the people with intellectual disabilities could become part of the workforce. She even had specific ideas--cash-register-operators in grocery stores or bank-withdrawal tabulators.

You have to understand how revolutionary this all was. Some of the nation didn't devote a second's thought to people with intellectual disabilities, some thought they should be locked up in dark rooms and some were frightened and intimidated by them. And here was a woman from one of America's First Families saying that we should hand them our money. Here was a woman saying, Sorry, you're all wrong.

But even with the efforts of Eunice and her growing army of young advocates, the movement needed a spark to set off a fire. That would come in 1968 and continue to this day around the world as part of her legacy.