The Sargent Shriver International Global Messengers (SSIGMs) made quite the positive impact at Special Olympics World Games Abu Dhabi 2019. Although the Games officially started on 15 March, the SSIGMs hit the ground running on 12 March, partaking in meet n’ greets with Special Olympics donors and rehearsing for the upcoming events, including the Global Inclusive Health Forum, the Founders Reception in honor of Eunice Kennedy Shriver, and the Opening Ceremony! During the two weeks of World Games excitement, the 10 SSIGMs had their work cut out for them. 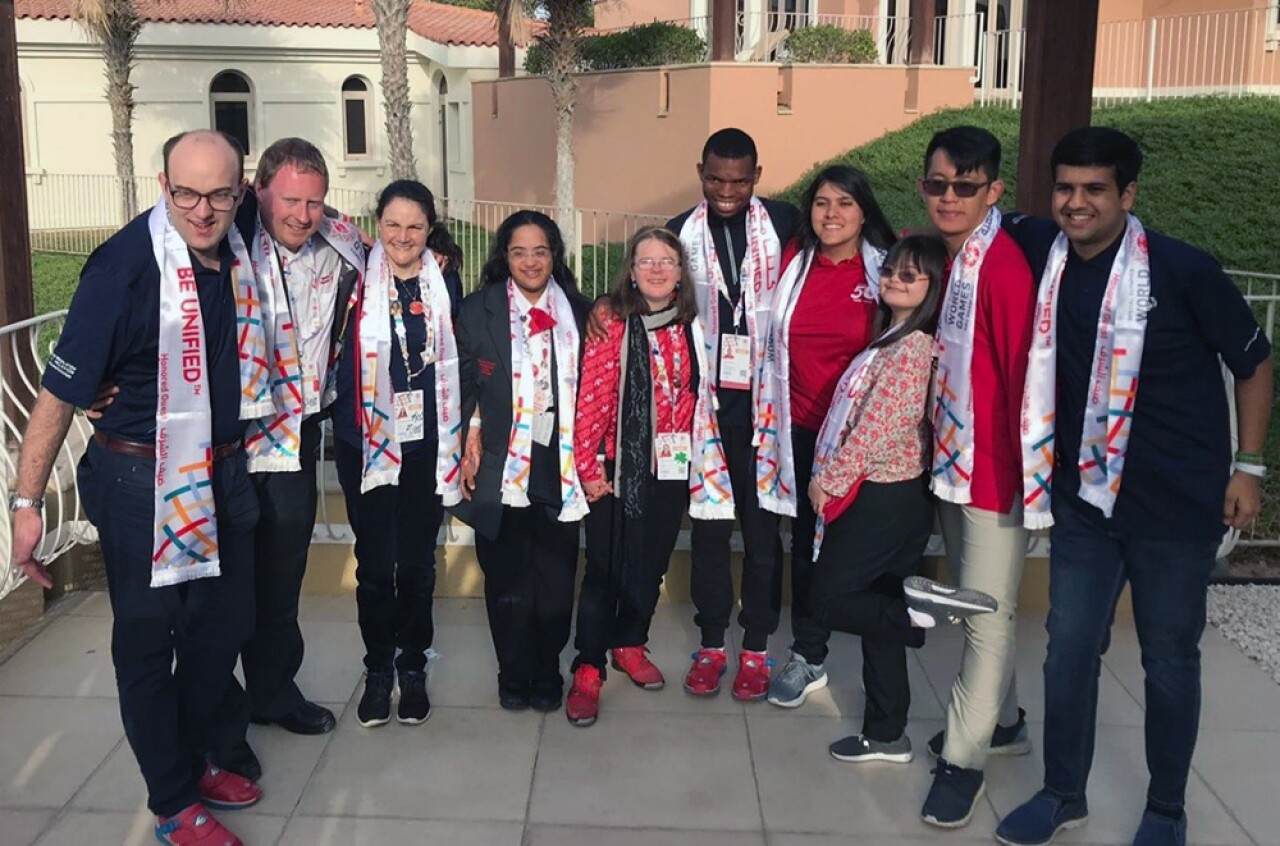 The Sargent Shriver International Global Messengers represented the Special Olympics (SO) global movement in such an inspiring way. These athletes embraced their leadership roles and made sure to get their empowering messages across various audiences. It is important to point out that the SSIGM participation in the 2019 World Games was unlike any other. They took part in a total of 65 speaking engagements, most of which were with minimal talking points and limited scripted speeches. 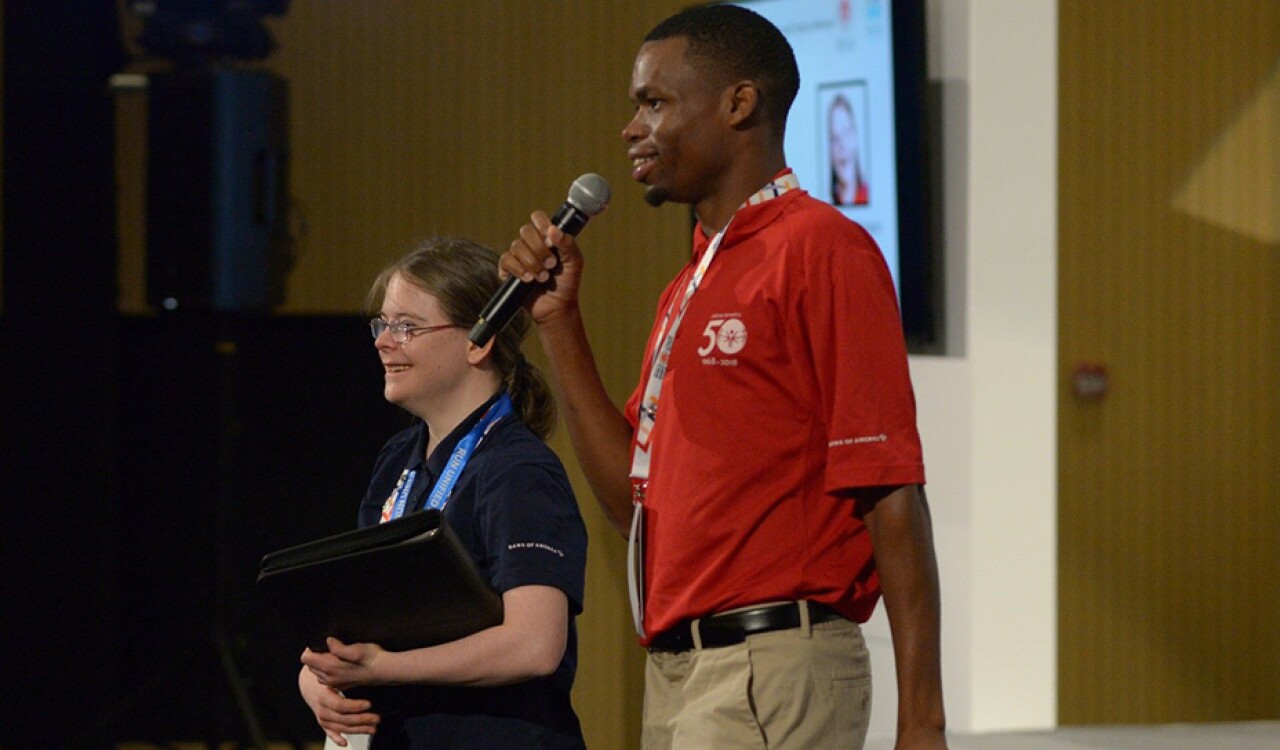 Masters of the Microphone
During the Games, you could find many of the SSIGMs emceeing certain events. Ian Harper and Emanuelle de Souza were the official emcees of the Founder’s Reception in honor of Eunice Kennedy Shriver. During the Global Youth Leadership Summit at New York University Abu Dhabi, a total of 6 SSIGMs hosted the morning sessions to kick off each day with reflection from the Summit participants. The Global Inclusive Health Forum was co-emceed by Renee Manfredi and Nyasha Derera. During the Young Athletes demonstration, Brina Maxino and Daniel Smrokowski also co-emceed alongside a well-known UAE radio personality. Ian Harper was also the co-emcee of the Motor Activity Training Program (MATP), alongside Senior Manager of Global Youth Engagement, Meghan Hussey. Having the SSIGMs emcee these events was a great representation of the athlete leadership program and highlighted the speaking skills of this great group of athlete leaders! 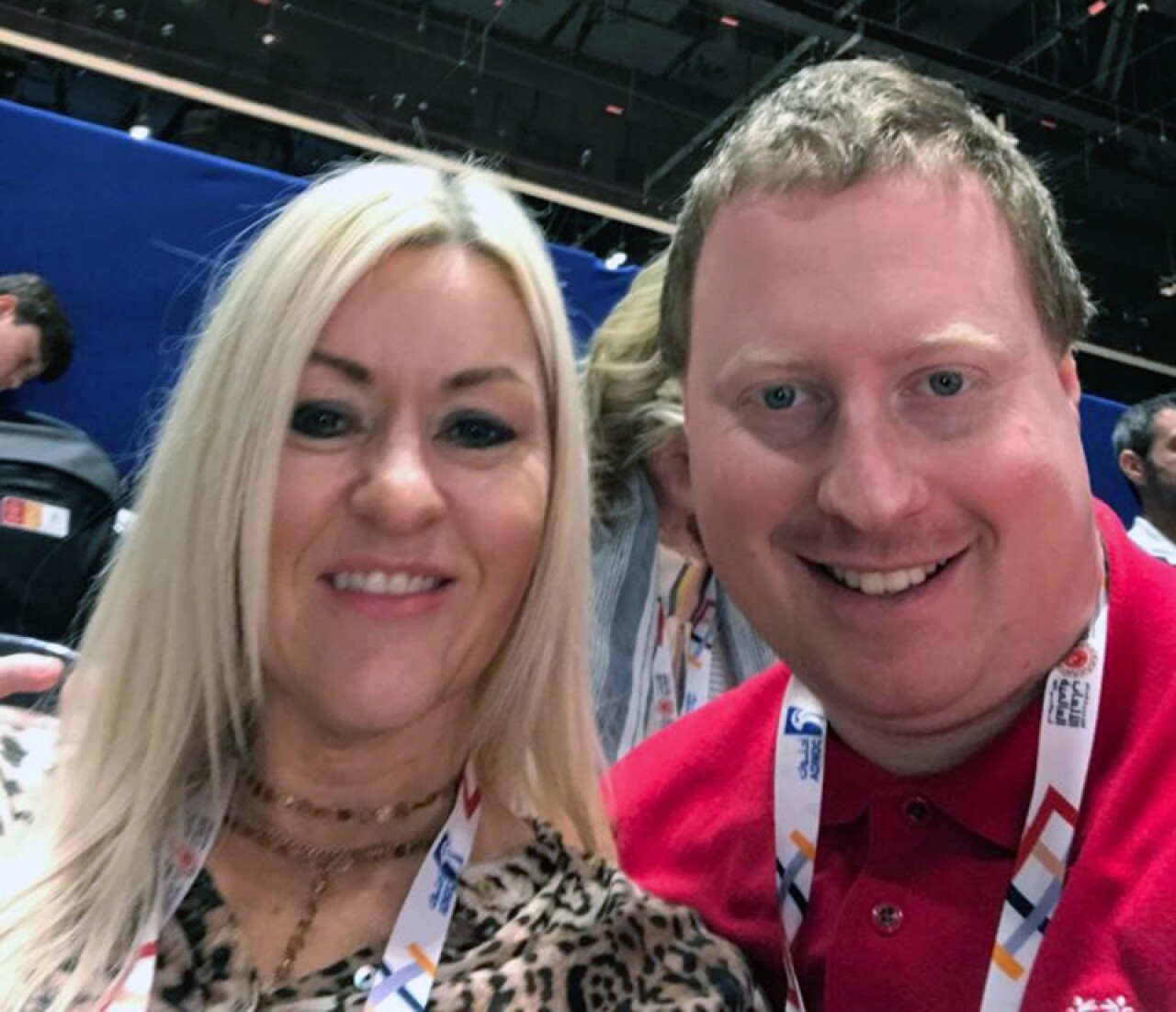 Abu Dhabi Daily Show
An exciting new podcast was introduced called the Abu Dhabi Daily Show. Daniel Smrokowski and Ian Harper led this show conducting interviews with a number of different people during the two weeks at World Games. The SSIGMs came up with their own questions and their target of interviewees was very inclusive. Ian sat down with honored guest, Caroline Frankum, the Global CEO of Lightspeed (global partner of Kantar) who just started their 4 year partnership with Special Olympics. They spoke about the #InclusionRevolution and how Kantar plans to spread inclusion in their global organization. Daniel interviewed over 9 different people during world games, including parents of competing athletes, Special Olympics USA snowboarder Daina Shilts, fellow SSIGM, and Mark Shriver, new Board Member of Special Olympics and son of Eunice Kennedy Shriver.

Importance of Athlete Feedback
Brina Maxino sat on the Global Youth Leadership Summit (GYLS) Legacy Panel at NYU Abu Dhabi. She was invited to this event due to her participation at 2013 World Winter Games in PyeongChang and the project she and her Unified partner presented in 2015 in Los Angeles at the World Summer Games. Their project, “Eye Can Play: A Fun Eyeffair”, focused on the importance of inclusive vision care and how to make vision tests a fun experience for people with and without intellectual disabilities (ID). Brina’s participation in the two previous Summits made it an easy choice to have her to speak on the GYLS Legacy Panel at the 2019 World Summer Games Abu Dhabi!

Kurtis Jon Siu brought valuable insight to the Observer’s Program that was held toward the end of World Games. He was the only Special Olympics athlete who participated in this program. Kurtis spoke about why it is important to host World Games, the impact that World Games has on the Special Olympics athletes and what his expectations are for 2021 World Winter Games in Sweden and the 2023 World Summer Games in Berlin. 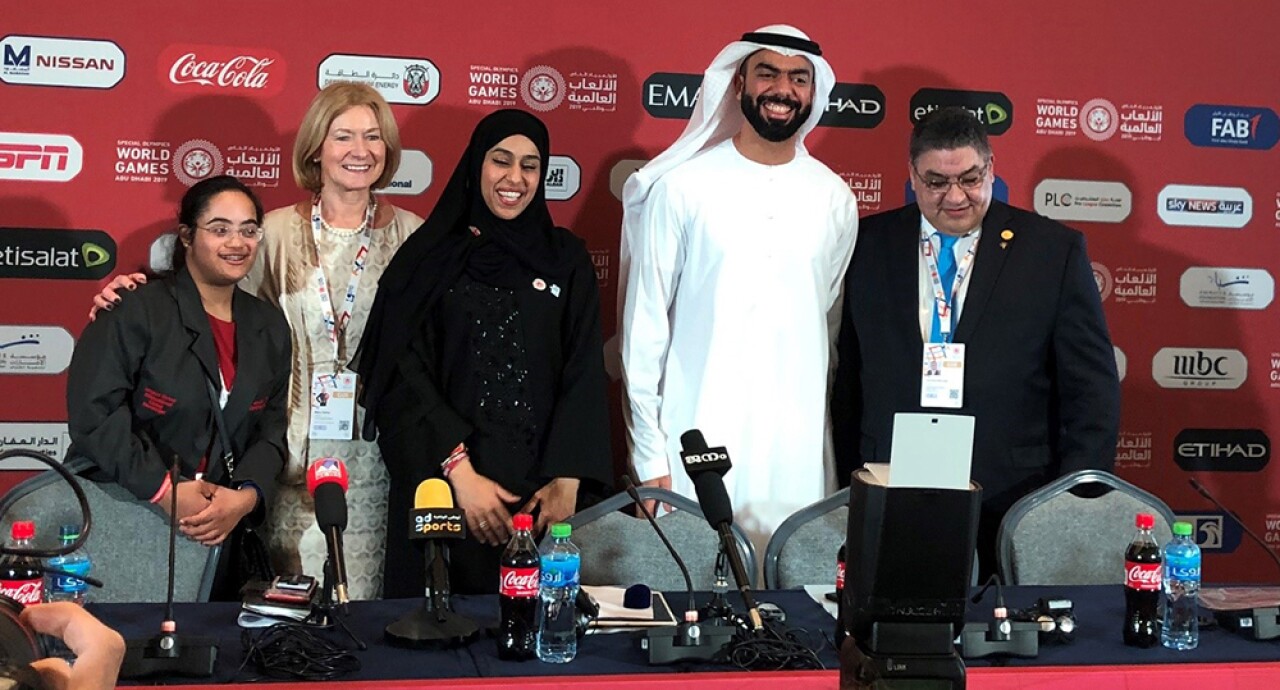 Messengers in the Media
The official opening press conference was held on 13 March at the Abu Dhabi National Exhibition Center (ADNEC). SSIGM, Maryam Thyab, spoke at the press conference along with Special Olympics CEO, Mary Davis, Her Excellency Hessa bint Essa Buhumaid, Minister of Community Development, His Excellency Saif Saeed Ghobash, Member of the Higher Committee for Special Olympics World Games Abu Dhabi 2019, and Eng. Ayman Abdel Wahab, Regional President of Special Olympics Middle East North Africa (MENA). They discussed the positive impact the World Games have brought at the local, regional, and global level and how perceptions of people with determination will continue to change in a positive light. As these Games broke records for having the most media coverage Special Olympics World Games has ever seen, Daniel Smrokowski knew he had to get in on the action. The Pod Man Dan, as they call him, started his own nonprofit media platform in 2008 called Special Chronicles. He is an award-winning columnist who covers stories for people with intellectual disabilities (ID). He and fellow journalists attended the Media Reception on 17 March and he spoke about role of the media in advancing a world of full inclusion. 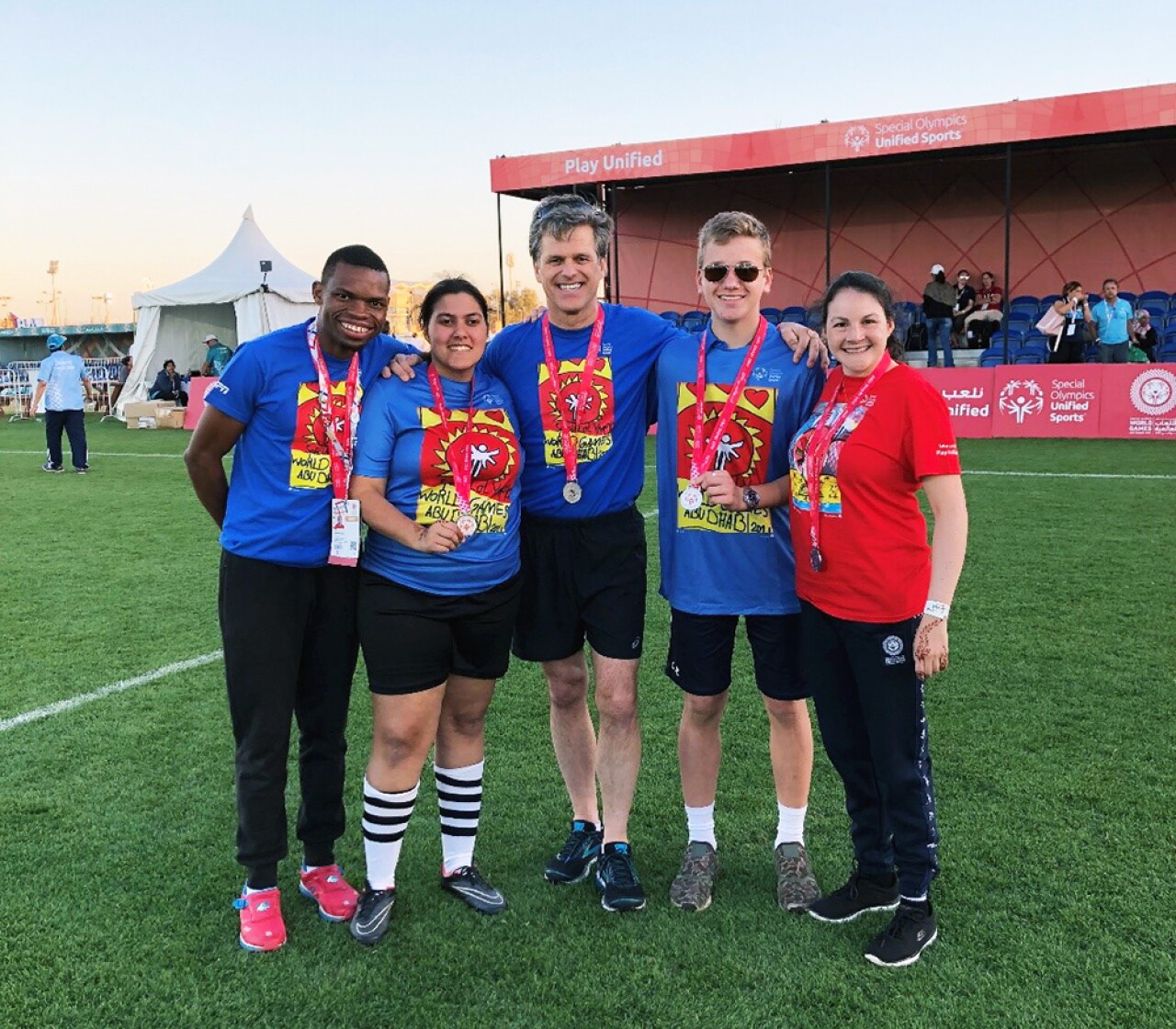 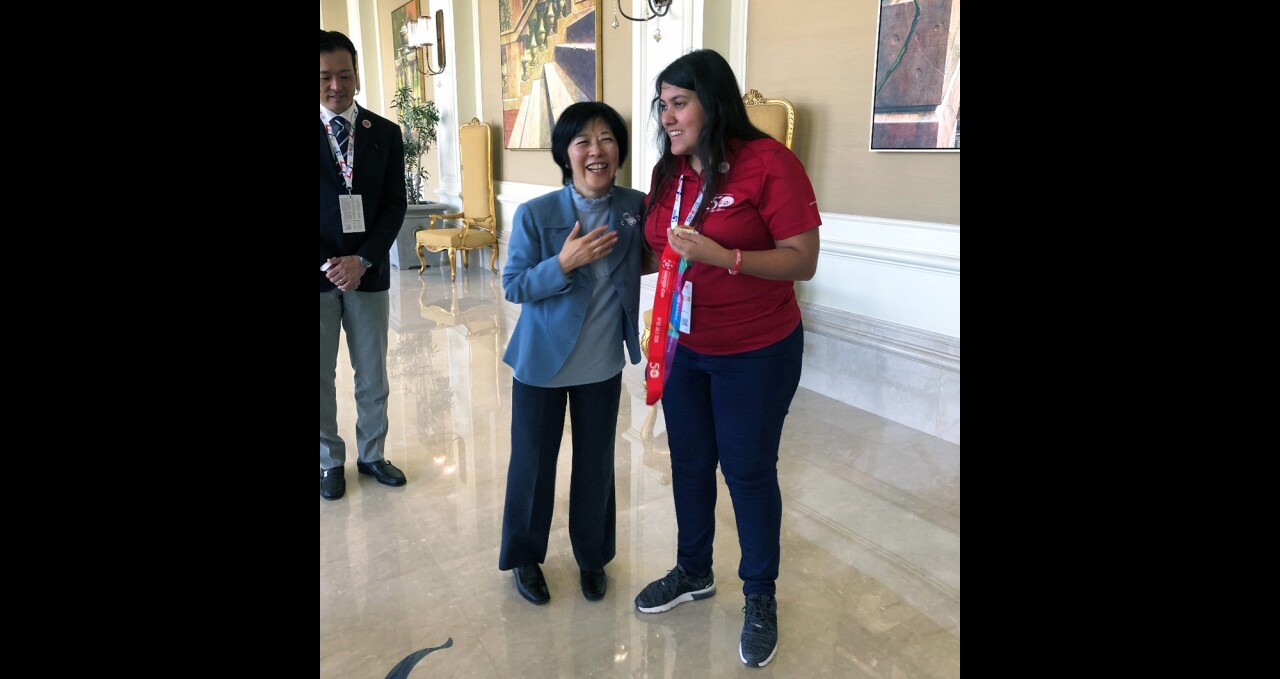 Partnerships
Special Olympics is fortunate to be partnered with some amazing organizations. With strong partnerships comes valuable relationships. These relationships truly shined in Abu Dhabi when partners Bank of America, Toyota, and Coca Cola showed their support to the SSIGMs. Chairman of Coca Cola, Muhtar Kent hosted a luncheon for the SSIGMs to recognize their successes and to get to know the group more. Daniel Smrokowski hosted the program while the rest of the athlete leaders stood beside him and introduced themselves in their own way. Mrs. Toyoda, president of Toyota, and Emanuelle de Souza sat down with each other for a brief chat. Emanuelle had the chance to thank Mrs. Toyoda and tell her about her experience at the 2018 Unified Cup in Chicago at the 50th Anniversary for Special Olympics where Toyota was the Presenting Sponsor. Bank of America’s Senior Vice President, Sue Burton and SSIGM, Hanna Joy Atkinson hung out at the Opening Ceremony Reception and Hanna thanked her for her continuing support of athlete leadership and the Special Olympics movement as a whole! 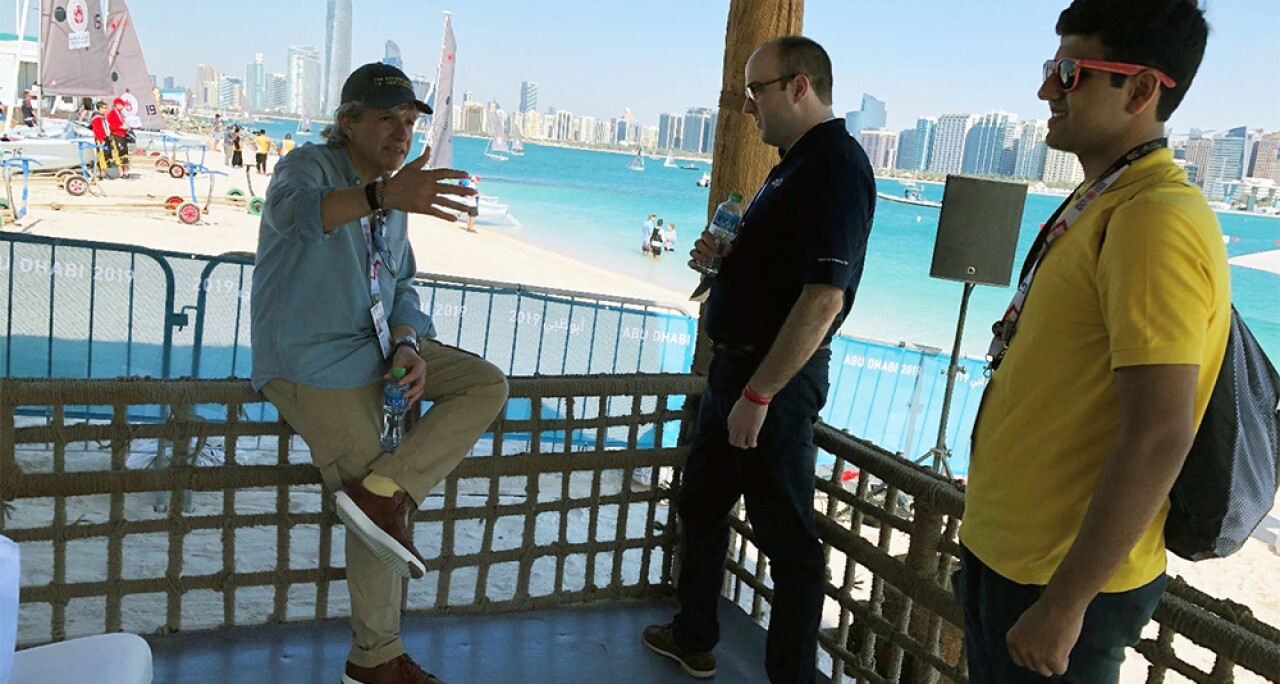 Determined Athletes, Determined Supporters
Special Olympics is lucky to have motivated Global Ambassadors and Board Members who give non-stop support to the movement. A number of these supporters made their way to Abu Dhabi to celebrate the World Games and some of the SSIGMs met with them to thank them for all that they do for Special Olympics. David Sable, member of the Special Olympics International Board of Directors, met up with Daniel Smrokowski and Haseeb Abbasi at the Sailing venue at Corniche Beach to talk about their leadership roles as newly appointed Sargent Shriver International Global Messengers. Renee Manfredi and Ian Harper had the chance to join international recording artist and Special Olympics Global Ambassador, Nicole Scherzinger at the Al Forsan International Sports Resort for the Equestrian award ceremony. Afterwards, they chatted over a cup of coffee about how important Nicole’s support is to the movement. Global Ambassadors Apolo Ohno, Michelle Kwan, Hannah Teter, Seun Adigun, and Dale Moss were also met with the SSIGMs during Games. Giving these athlete leaders a chance to speak with the celebrity Global Ambassadors and important Board Members is the perfect way to secure their support in the Special Olympics movement.

More than Messengers
The SSIGMs weren’t the only athlete leaders at World Games. Former SSIGMs and athlete leaders from the Special Olympics movement gathered in Abu Dhabi to spread the word of inclusion in any way they could. SSIGM from the class of 2014-2018, Brightfield Shadi, was there as an assistant delegate supporting athletes from his country, Botswana. Ephraim Mohlakane, SSIGM class of 2002-2004 came to Abu Dhabi as the assistant head of his delegation, South Africa. Ariel Ary, SSIGM class of 2010-2014, came to the Games as a photographer for Special Olympics Costa Rica. Ben Haack, valuable member of the Global Athlete Leadership team and member of the board took the trip from Australia to be a part of the World Games. Being a member of the Special Olympics Board, Ben participated in meetings, spoke at the Special Olympics Asia Pacific Reception, and was extra support to the new class of SSIGMs. Matthew Williams, former SSIGM Class of 2010-2014 and SO Board Member from Vancouver, Canada joined the athlete leadership team as an honored guest. He had a key role in the Global Youth Leadership Summit as an emcee and he and his wife participated in the Unified Tennis Experience where Matthew was interviewed about Unified means to him. Another example of athlete leadership is through officiating competition. Philomena O’Hare, from SO Ireland, came to World Games as a basketball official. She also used recited the officials oath at opening ceremonies.