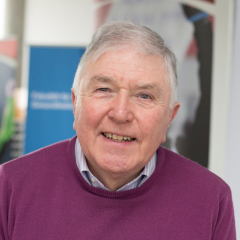 A psychologist by training and a native of Belfast, he has previously held posts in England, Scotland, and the Republic of Ireland. He has been a visiting Professor at the University of Cape Town, South Africa, and Trinity College, Dublin.

Roy has worked in the field of intellectual and developmental disabilities for nearly 50 years and has authored, co-authored, and edited over 15 books and published around 200 book chapters and research papers in learned journals.

He has acted as a consultant to various United Nations agencies and international NGOs. This work has taken him to 25 countries in Eastern Europe, Africa, Asia, and South America. Currently, he is a consultant to Special Olympics International on health and social inclusion projects. He is a Fellow of the International Association for the Scientific Study of Intellectual and Developmental Disabilities and a Past President and Fellow of the Psychological Society of Ireland.