Rodney Hankins didn't find a permanent home with Special Olympics until his teenage years, but he never looked back once he did. Competing in track and field, he failed to qualify to compete in the 100m and 200m race at the 1976 Special Olympics New York State Games. Instead, at that same event, he set the record for a 15-year-old in the standing broad jump. At that moment, he surprised everyone, including himself.

Finding immense confidence through sports, including when he was selected to compete at the 1995 and 1999 Special Olympics World Games, Hankins was able to work towards his goal of inspiring and giving a voice to the voiceless. Hankins had found so much success in athletics that he was looking for other ways to make an impact, perhaps through coaching. As someone who had often shattered expectations, he felt like he could make a difference using his life experiences to inspire others. Though, after watching from behind-the-scenes, he wasn't too sure about the idea of coaching.

"I didn't want to coach track after what I saw from my track club," he says, barely able to contain himself from laughing so hard. "I saw how difficult it was."

But after competing in track and field for the majority of his life, he was introduced by his best friend, Chris Greif, to bowling. After some time learning the sport and gaining experience, he quickly became a prominent name throughout the Special Olympics New York bowling community. People began asking questions, "how do you do this? And how do you do that?" Almost accidentally, he became a coach, but it's a position he quickly learned that he was made to fill.

Hankins' bowling knowledge is extensive: he can explain the difference between a sport shot and a house shot in great detail. "A typical house shot, you can just put the ball anywhere; if you put it in the right spot, you're going to get a strike over and over and over again," Hankins explains. "With a sport shot, everything is a reverse block and it's so hard; you got to have sanding pads to sand the balls down if you practice these sport shots because everything is invisible."

Hankins focuses on the small details. He trains each athlete differently, teaching them how to roll the ball and when it's time to change its weight. He always teaches his athletes to stretch, saying, "no matter what sport you're doing, you have to stretch your arm."

Hankins says when the athletes "get it," it is his favorite part of coaching. He'll provide tips on how to put the ball in a specific location or how to get it in the pocket. "They get happy and so they come to me and they smile," he says about the joy of coaching.

For him, coaching is fun, and he enjoys it. But when the global pandemic spread rapidly around the world, it forced his coaching style to change. "I can only train one athlete at a time and it's only for an hour and we have to wear our masks inside the bowling alley," Hankins says.

His passion for sports is apparent, and his excitement when athletes are successful is clear as day.

Years earlier, along with his athletic ability, Hankins showcased he can impact the community. After being invited to the Sony studios and speaking with Founder of Special Olympics, Eunice Kennedy Shriver, and her son Tim Shriver, current Chairman of Special Olympics, he worked his way to becoming a member of the 2002 – 2003 class of Sargent Shriver International Global Messengers. He had opportunities to travel the world, speak to large groups of people and share the importance of healthy eating. He finally had a platform to share his story beyond Special Olympics.

"I focused on athletes' eating habits. That was my platform," he says, mentioning that many athletes don't eat healthy and it's something essential to him.

"He practices what he preaches," Debra Greif, Chris's mom and Hankins' mentor says. "He doesn't smoke. He doesn't drink. And he watches what he eats. He is really healthy."

Over the years, Hankins’ pride in the organization's advancement has grown, saying they've done an excellent job at "letting the athletes talk." As he mentions, there should be more than one person talking about Special Olympics.

He's the perfect example of an athlete using his athletic gifts to advance everyday opportunities for those with intellectual disabilities. He makes the most out of his interactions with athletes, volunteers, and staff members within Special Olympics. Whether it's coaching or advocating, Hankins message comes across as a powerful one. His experiences and the lessons he has learned resonate with those that follow him. It's what allows him to have such an impact on everyone he meets.

"I would like to see more changes though because I'm taken aback by how a lot of wheelchair athletes don't get a chance to go to State Games or World Games," Hankins adds about the type of impact and changes he'd love to see in the future of Special Olympics. "From my experience, I only saw one blind athlete run the 50m by herself with volunteers holding bells.

"I saw another athlete, he was from Jersey and had cerebral palsy and he ran with the crutches. I would like to see more of that happening, but I don't see it that much," he continues.

The impact he's made and still wants to make stretches far beyond just Special Olympics. It reaches athletes from different disciplines and people throughout his community. His influence holds strong meaning to athletics. Both Hankins' wisdom and years of life experience tell that story on their own.

Hankins' purpose has always been to paint a picture of the type of person everyone should aim to be, regardless of ability level.

"Believe it or not, no one is perfect in this world. We all have disabilities, we all have limitations," Hankins' quote ends the 50 Game Changers documentary in which he was featured. "Don't look at the outer appearance of a person and say they can't do anything. Try to find out what the inner appearance is because you'd be surprised what people can accomplish." 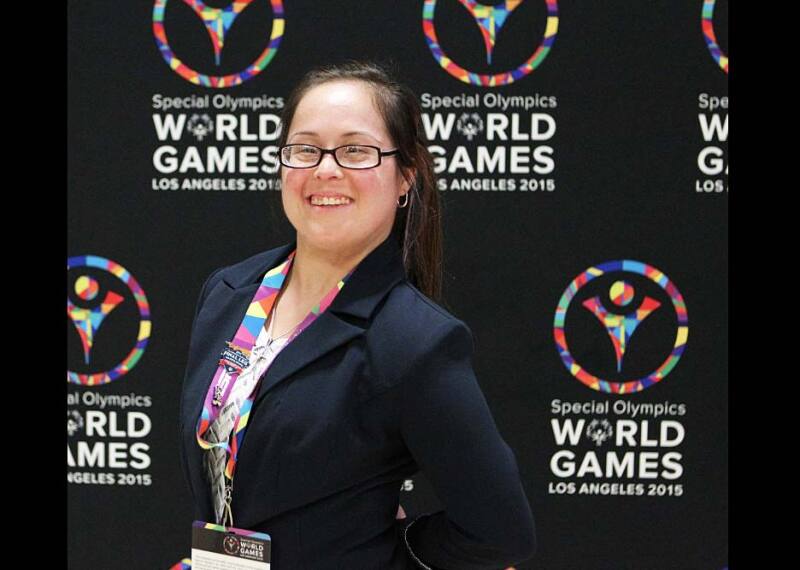