Employment stories come in all categories, with each story reflecting a unique perspective and journey to getting that job. For people with intellectual and developmental disabilities, it is not always an easy journey to employment. But throughout the Special Olympics North America Region , Special Olympics athletes are changing the narrative when it comes to job opportunities. And this year for National Disability Employment Awareness Month , we are highlighting those athletes.

Jerry Holy has competed with Special Olympics Virginia since elementary school, and currently trains and competes in five sports, as he says, "it's been a long way being involved from various state-level competitions and out-of-state competitions."

Now, many years later, he is a proud alum of George Mason University and a Specialist in the Special Olympics North America Unified Champion Schools department. He works primarily on data analysis, grant administration and resource management.

As months went by, he was offered his first and only job. "I came on board, and I've been here since," he says. With a smile, he says, “maybe one day I’ll be a CEO of a Program.”

He loves working for the organization and feels his perspective as an athlete brings something to the team that not everyone can.

Callum Denault, who is currently in college studying journalism, interns with Special Olympics Ontario in the communications department. Getting a start in the organization when he was about seven years old, he's participated in floor hockey and soccer but now uses his journalism and communication skills to impact other athletes.

"I've been a summer intern every year since 2018 and the hours are really flexible," Denault says as he begins to share his employment journey. Multiple athletes have interned with Special Olympics Ontario and have gone on to become full-time employees, including one of Denault’s current supervisors.

Working while in school, Denault spreads his hours out throughout the school year. With a focus on Athlete Leadership and Healthy Athletes , he shares some of his favorite memories, "there was one time I got to interview some of the athletes on our Toronto FC Unified team. They were doing an event with the professional Major League Soccer players, and it was really cool to interview them and ask them questions."

He firmly believes that Special Olympics Programs hiring athletes or other individuals with an intellectual or developmental disability benefits everyone. He details how everyone works differently and that while some people might need extra help, each person brings a different skill to help achieve the end goal.

As he continues to study journalism and intern with Special Olympics Ontario, he brainstorms how he wants to use his platform in the future. "In terms of my knowledge, sports journalism is a good path," Denault says about the type of journalism career he’d like to pursue. "But during COVID-19, I've really enjoyed covering issues." He says, "writing stories about people who are underrepresented in the media is what I want to write."

Special Olympics is giving him that career start.

30 years ago, Ben Collins got a similar career start when he began working at Special Olympics’ global headquarters in Washington, D.C.

"Working with Special Olympics is a family-like atmosphere. It's very friendly, upbeat and everyone always has a positive attitude,” Collins says.

Collins is visually impaired and relies on assisted technology when working. He does a presentation called “Welcome to My World” for other Special Olympics International employees so they can see what a typical day at work is like for him, giving his co-workers valuable insight into what navigating the workplace with a disability is like.

Collins loves teaching others about what work is like for him but has also had to learn new things while working remotely as an Operations Specialist in the marketing and communications department. "Meetings were hard without somebody sitting next to me telling me what's on the screen," Collins says about the impact the pandemic has had on him. "Now I have to get the agendas a couple of days ahead of time so I can memorize it."

Megan Gausemel, Director of Awareness Planning and Operations, works closely with Collins and has seen the impact he has not just on her but the entire organization and community.

"I think having Ben on our team is so important because we really want to make sure that our athletes always have a seat at the table," Gausemel says about him. "When I was tasked with doing orientations for our Global Ambassadors , I sat down with Ben, and I thought it'd be best for him to present those because he knows Special Olympics better than I do."

While Collins represents the first round of Special Olympics athletes employed by the organization, Megan Galarowicz and Edward Kastern from Special Olympics Wisconsin represent the newest, both making the transition to employees in May.

"The opportunity came up through the VP of Unified Leadership," Galarowicz says about her employment journey. "She approached me about this opportunity, and we tried to do an internship."

However, with the many restrictions stemming from the COVID-19 pandemic, that plan didn't work out. Initially disappointed about not getting to intern, Galarowicz is happy with how everything worked out and wouldn't change anything about her employment journey.

For Kastern, the employment journey was a long one. "Prior to this I was looking for a job for 10 years," Kastern says. "I have taken every single athlete leadership course that's offered, and Jeanne (Hrovat) came to me and offered me the job. I've never felt more accepted or more wanted anywhere than this job."

As members of Special Olympics Wisconsin's Unified Leadership task force, they get the opportunity to share unique perspectives on inclusion and the ways it's seen in the workforce. Their daily responsibilities include completing surveys, teaching leadership classes, as well as helping run events.

"My mom is a teacher and I never thought that I would become one myself, but here I am," Kastern says with much excitement in his voice. Galarowicz adds that the work environment is "friendly, and easy to ask questions.”

"As their supervisor and colleague, I am constantly learning from them and I am certain that they make me a better employee and citizen," Jeanne Hrovat, Vice President of Unified Leadership with Special Olympics Wisconsin, says about the pair. "As athlete leaders and trainers in our Unified Leadership courses, it is not surprising that new athlete leaders view Edward and Megan as positive role models, but even more remarkable is how their involvement has meant a higher degree of engagement and connection to the mission by all staff."

Daniel Morales has participated in several Special Olympics programs across the North American Region. Being part of a military family, he has stories about living in different states. Now, that his dad is stationed in Virginia, he has joined the Special Olympics Virginia communications team. With a spunky personality, Morales shows off his skills in front of the camera, and during a podcast he hosts.

“I got started doing things on camera at a track meet when somebody needed to be at the Torch Run kickoff,” Morales says. “I read a speech and everyone loved it. I was asked if I was a Global Messenger and when I said no, they said, ‘well you should be.’ That’s what started this all.”

Morales conducts interviews, gives speeches and plans to be involved with Special Olympics Virginia's communications efforts at the 2022 USA Games .

This fall, taking what he’s learned from Special Olympics along with his passion for sports, Morales will begin working towards a degree in broadcast journalism. “I will be attending Full Sail University at the Dan Patrick School of Sportscasting,” Morales says.

More Special Olympics Programs are starting to employ athletes at different levels of the organization and that's a good thing. It's teaching athletes to be independent, helping them learn and grow as individuals and advance their careers. But every athlete is quick to point out that employing people with intellectual and development disabilities is just as beneficial for the employer.

For more than 50 years, Special Olympics has led the way in showcasing inclusion through the power of sports, as a movement not just for people with intellectual disabilities, but as one led by them. With more than 70 Special Olympics North America Programs employing people with intellectual disabilities, the organization continues to live up to its highest ideals.

Our Athletes
Special Olympics Athlete Ashley Adie Finds a Sense of Belonging; Both in Sport and the Workplace
In 2004, 14-year old Ashley Adie experienced true inclusion for the first time. During a Special Olympics British Columbia Regional swim meet, Adie would enjoy the competition, but she found something much more than the ribbons and personal bests that day.
3 Min Read

Our Athletes
Special Olympics Athlete Steps into Leadership Role: in Community, at Work and in Movement
There he is, alone, with mother nature. Unlacing his shoes and removing his socks, he walks barefoot on the Iowa soil. Depending on the day, a shadow might reflect off the cool grass. The crisp sharpness of the earth glides across his skin helping Tyler Leech disconnect from the world.
4 Min Read 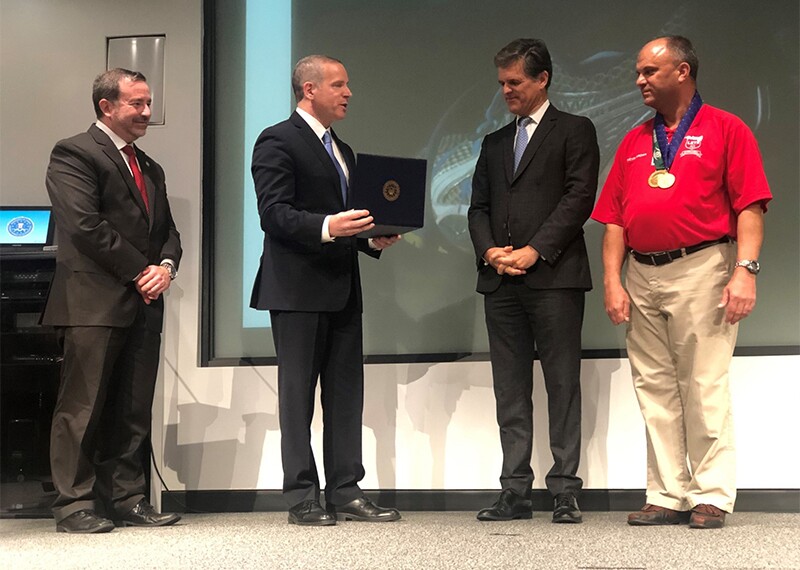 Our Athletes
Special Olympics Athlete Goes Above and Beyond With the FBI
Kevin Brown has overcome just about every obstacle put in front of him. He’s never let failure or people giving him a hard time stop him from doing what he loves. But most of all, he puts others first, leads by example and goes above and beyond, even in these uncertain times.
5 Min Read