[From August 2021 to May 2022, The Decade of Inclusion  interview series will capture the past, present and future of the partnership between Division III and Special Olympics. This is the fifth article in the 10-part series. Stay tuned to hear how the lives of student-athletes and Special Olympics athletes have been impacted over time, what is happening currently, and what’s still to come.]

HCAC Commissioner Jay Jones has been with the conference for just over two years and says from what Ragsdale and Furnish created, the partnership has just “grown and matured,” also adding that “the rest of the league and its members have bought in.” Without that support, the partnership may never have found this much success.

“My job is to not mess up the great work that they did and the enthusiasm I found for the Special Olympics partnership when I came into the job,” Jones says.

Throughout the state of Indiana, the conference continues to encourage all its student-athletes to get involved with Special Olympics Unified Sports® events. And the conference’s ability to pivot and change direction when the global pandemic hit sent a strong and impactful message, telling the story of how dedicated they are and just how big the partnership with Special Olympics can be.

“We weren’t able to do the 2021 Unified Bowling Championships, but we were able to do Unified Trivia,” Mike Hasch, Special Olympics Indiana Director of Unified Champion Schools, says about the impact of COVID-19. “And because of so much positive feedback from the HCAC student-athletes and SAAC members, we now have created our second event in partnership with the HCAC.”

It's a night that is normally filled with excitement: the HCAC Special Olympics Unified Bowling Championship is one of the biggest events of the year.

“This event predates me,” Jones says with a laugh. Giving credit to Ragsdale and Furnish, Jones says Ragsdale’s intentions were clear, “every single part of the event just needs to be another conference championship.”

And they were successful, from the trophies handed out to the conference recognition. “It raises the level of gravity and importance,” Jones says. He points the success to the original “buy in” with the partnership.

While things have looked different recently, it has forced the conference and Special Olympics to get creative and set new standards for the future. “We are now having some of our HCAC coaches meetings at the Special Olympics Indiana office,” Jones says, following up with, “it drives home for our coaches the importance of the relationship but also reminds them that it’s a partnership and we help each other.”

It’s a partnership that started with a shared love of Special Olympics and one that has expanded to what it is now. It gives Special Olympics athletes an identity. It provides them with the tools to create valuable friendships and a sense of not being invisible. And it continues to grow year after year. 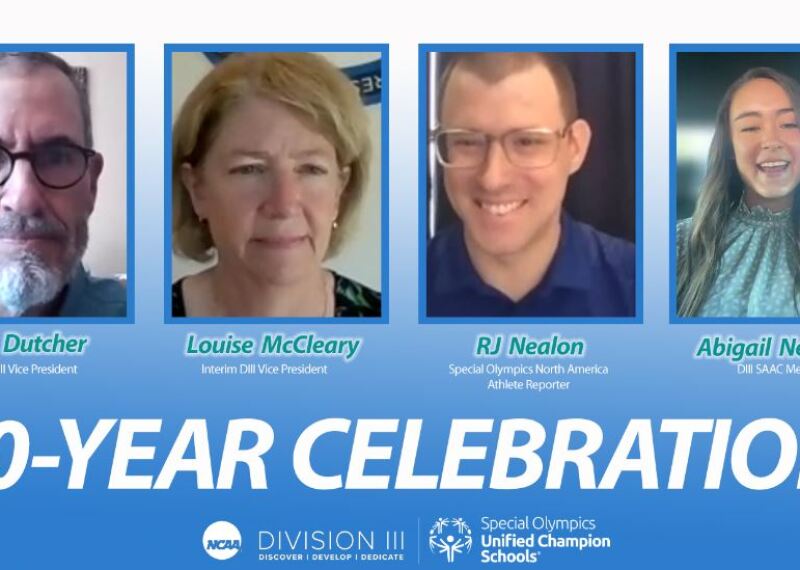 Our Impact
NCAA Division III and Special Olympics Celebrate A Decade-Long Partnership
In 2011, Dan Dutcher, the former Vice President of Division III, set out to find what could take the identity of Division III to the next level.
2 Min Read 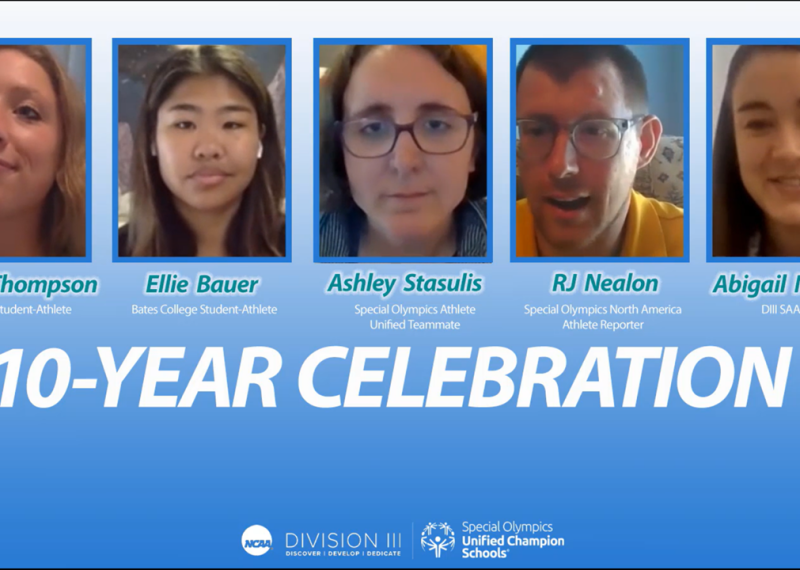 Our Impact
NCAA Division III Students and Special Olympics Athletes Build Strong Friendships Through Partnership
Friendship, belonging, kindness, connection and community. These are just a few of the words used to describe what inclusion and the Division III/Special Olympics partnership means to them.
2 Min Read