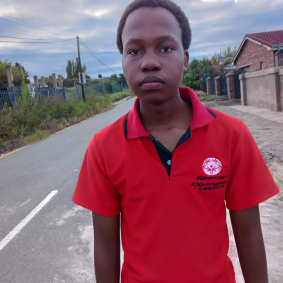 Bafokeng
Region
Africa
Program
Lesotho
Project Year
2022
Bafokeng will encourage members of his community to get involved with inclusive activities through Special Olympics.

About the Project Leader

Bafokeng, 18, is a Youth Leader from Lesotho who has been involved with Special Olympics as a volunteer and coach since 2021. He wants to raise awareness about individuals with intellectual disabilities and advocate for them to be included in communities at large. He believes that they should not be prevented from sharing their talents and abilities with the world and that the stigma around disabilities needs to be removed from society.

In Lesotho, Bafokeng has noticed that there is a lot of shame and secrecy with individuals with disabilities and their families and therefore Special Olympics Lesotho often struggles to identify and recruit athletes. There is an underlying challenge of society and the general community not accepting those with intellectual disabilities. Another issue is that there are not enough Unified activities or Unified Schools available. Bafokeng has also realized that COVID-19 has had a negative effect by highlighting the financial, social, and emotional needs of those with intellectual disabilities.

Bafokeng’s plan first includes sharing resources to local families with individuals with intellectual disabilities to allow them to feel more comfortable with getting involved with Special Olympics Lesotho. The project plan involves having community leaders go through training, so they are better equipped to lead and advocate for an inclusive environment. Community gathering places, such as churches and schools, will also act as a place of inclusion and this will be enforced throughout Lesotho.

The “Unified Communities and Advocacy” plan involves a greater outreach to schools, churches, and organizations to become Unified communities. The hope is that more Special Olympics athletes are empowered to become leaders and inspire others to showcase their talents and share their knowledge.