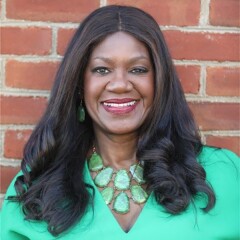 Benita Fitzgerald Mosley is an Olympic gold medalist and an established international leader in the sports and business sectors, and she has a passion for helping people and organizations win gold medals in life and work. Benita currently serves as the Vice President of Community and Impact and President of FundPlay for LeagueApps, a youth sports management technology platform.

Benita also serves as a Senior Advisor for Proteus International, helping clients clarify their vision and strategy to move toward their hoped-for future. Prior to LeagueApps, Benita most recently served as the Chief Executive Officer of the Laureus Sport for Good Foundation USA from 2016-2020, leveraging the power of Sport for Good to build thriving kids and communities across the United States.

Benita joined Laureus USA following her senior executive role with the United States Olympic Committee as Chief Operating Officer, and prior to that, she served as USA Track & Field’s Chief of Sport Performance. Benita led Team USA to win 29 medals at the 2012 Olympic Games in London, the most of any U.S. track and field team in 20 years.

She was named “Cable TV Executive of the Year” by Television Week Magazine for her leadership role as President and CEO of Women in Cable Telecommunications (WICT). Named a 2019 Notable Women in Sports by Crain’s New York Business and a 2015 Game Changer by the Sports Business Journal, Benita also serves on the International Olympic Committee Sport and Active Society Commission, and the Boards of Special Olympics International and the US Olympic & Paralympic Museum.

Benita’s illustrious career as a track athlete was capped by winning a gold medal in the 100-meter hurdles at the 1984 Olympic Games in Los Angeles, making her the first American woman to accomplish this feat. She was named “Sportswoman of the Century” by The Potomac News, and “Top Female Sports Figure of the Century from Virginia” by Sports Illustrated. Benita is a graduate of the University of Tennessee with a B.S. in Industrial Engineering and a charter member of the Tennessee Volunteers Hall of Fame. Benita, her husband Ron, and their two young adult children live in Haymarket, VA, located in the DC suburbs.