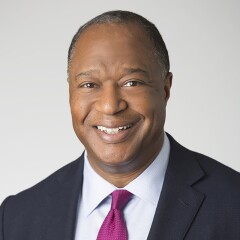 Dale E. Jones is one of the world’s top CEO and board leadership consultants. He currently serves as the Washington, D.C.-based CEO of Diversified Search Group, a leading executive search firm that’s been in business for more than 45 years. Jones previously served as Vice Chairman of Heidrick & Struggles (2009 to 2013) and as a Managing Partner (2000 to 2007).

Jones focuses exclusively on finding and attracting CEO and board-level talent for clients seeking authentic leadership—and capacity to lead. He is particularly adept at identifying those with heartfelt desire to serve others combined with “competencies in context” that are often difficult to find. Jones’ client list comprises both brand name companies and niche firms alike, including Fortune 500 companies and major institutions. As CEO of Diversified Search Group (DSG), he has led a strategic growth effort that has more than tripled (3x) revenue (from $30 million to $100 million) while gaining valuable expertise via acquisition of several niche firms.

Dale’s passion to help others fully realize their potential stems from a lifelong commitment to service. A native of Dallas, he grew up as the son of a shoe cobbler/janitor and a teacher. On Saturdays, Dale and his twin brother, Dan, would often go to work with their father and help clean office buildings. This value, and his heritage, would lead Dale to apply and enroll at Morehouse College in Atlanta. Following graduation, he began his career in banking. He later entered the field of executive search and leadership consulting, joining Heidrick & Struggles as managing partner of the Atlanta office (1999-2007).

In 2007, Dale made both a professional and life decision to relocate his family to Washington, D.C., where he worked for Revolution LLC, a venture-backed firm founded by Steve and Jean Case that funded efforts to provide clean drinking water to Africa. In 2009, Dale returned to Heidrick & Struggles where he helped lead the firm’s CEO and board practice in North America. He became CEO of Diversified Search in 2013.

Atypical among industry peers, Dale has been a corporate board member for Hughes Supply, Kohl’s Corp. and Northwestern Mutual Corp. (current) in addition to other not-for-profit roles with Morehouse College (current), The Special Olympics (current) and the Salvation Army’s national advisory board. He’s frequently quoted in the media and contributes regularly as a speaker/instructor at Georgetown University.