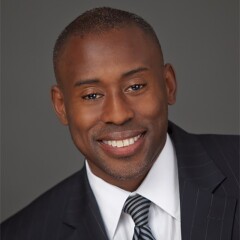 He began his career in private practice by working at several large law firms—including Fried, Frank, Harris, Shriver & Jacobson LLP. During his time in private practice, he focused on transactions, securities, and corporate governance.

Fitzgerald served as in-house counsel at both Choice Hotels and US Foods. In those organizations he practiced in an array of areas including governance, compliance, treasury and finance, advertising, global trademark management, and information technology. He then became Vice President, General Counsel, and Corporate Secretary of the Minority Corporate Counsel Association—a nonprofit dedicated to the promotion of diversity in the legal profession. He handled all legal matters at MCCA.

Fitzgerald is active in the in-house bar. He serves as the Membership Chair for the Nonprofit Organizations Network of the Association of Corporate Counsel (ACC) and as one of the Co-Chairs of the Corporate Scholars Program for the National Capital Region Chapter of the ACC (ACC NCR). Since its inception in 2003, the Corporate Scholars Program has provided summer internships and awarded over $1.85M in stipends to almost 200 diverse law students. ACC NCR recognized him in 2019 for his service to the chapter.