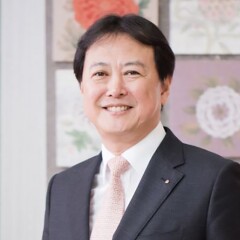 Mr. Changwoo Soh’s friendship in middle school with a classmate who was paralyzed from the neck down was the beginning of his spirit in service. As a friend, he helped with his classmate’s daily commuting while naturally learning of the difficulties some people had just to maneuver through the day.

He wears many hats, continuously serving as a dedicated Rotarian since 1992 with posts as Governor for his district, and tirelessly works towards a better tomorrow and a more inclusive future for everyone. Although he has numerous responsibilities in major posts of several business forums and takes care of his alma mater’s associations in Korea and abroad, being a devout catholic lies in the heart of his relentless efforts.

And befittingly, Mr. Soh is the CEO of Papa John’s Pizza, Korea, always sharing his good food with people in need and at events.

His dedication to Special Olympics Asia will surely bring light and good energy!