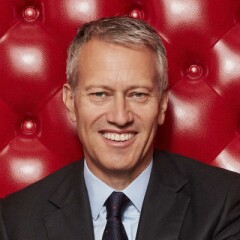 James Quincey is Chairman and CEO of The Coca-Cola Company. Quincey, who first joined the company in 1996, has held a number of leadership roles around the world. He became CEO in 2017 and was elected Chairman of the board in 2019.

Quincey is leading Coca-Cola in its continuing evolution as a total beverage company. Coca-Cola is a growth company that provides brands and beverages that make life’s everyday moments more enjoyable, all while doing business the right way. The result is shared opportunity for communities, customers, employees and shareowners.

Before becoming CEO, Quincey served as President and Chief Operating Officer of the company from 2015 to 2017.

From 2013 to 2015, he was President of the company’s Europe Group. Under his leadership, the group expanded its brand portfolio and improved market share. Quincey also played a key role in the creation of Coca-Cola European Partners, one of the largest independent Coca-Cola bottlers in the world. Quincey served as President of the Northwest Europe and Nordics business unit from 2008 to 2012. This role included leading the acquisition of innocent juice in 2009.

Quincey joined the company in Atlanta in 1996 as director of learning strategy for the Latin America Group. He went on to serve in a series of operational roles in Latin America, eventually leading to his appointment as President of the South Latin division in 2003. He was President of the company’s Mexico division from 2005 to 2008, where he led the acquisition of Jugos de Valle.

Prior to joining Coca-Cola, Quincey was a partner in strategy consulting at The Kalchas Group, a spinoff of Bain & Company and McKinsey.

Quincey serves as vice co-chair of The Consumer Goods Forum and is a founding member of the New York Stock Exchange Board Advisory Council.

Quincey, who speaks English and Spanish, received a bachelor's degree in electronic engineering from the University of Liverpool. He is a native of Britain.