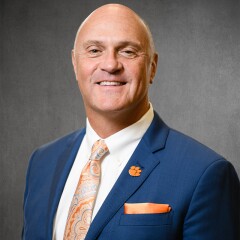 Under Clements’ leadership, Clemson has raised the bar in admissions, enrollment, research, diversity, graduation and retention rates. Clements has also led the way in helping to raise more than $1 billion in private funds since he arrived at Clemson. In addition, the campus is currently undergoing the largest construction boom in the history of the university.

Clements is a nationally recognized leader in higher education who has served as president of a university in three different athletic conferences, Big East Conference, Big 12 Conference and ACC, where he served as the 2016-17 chair of the ACC Council of Presidents.

He currently serves on the board of directors of the American Council on Education, the executive committee for the Council of Competitiveness and the Business Higher Education Forum. Clements previously served as the Chair of the Board for the Association of Public & Land-Grant Universities.

He holds a Bachelor of Science degree in computer science as well as a master’s degree and Ph.D. in operations analysis from the University of Maryland-Baltimore County. Clements also holds an M.S. degree in computer science from Johns Hopkins University’s Whiting School of Engineering and was awarded an honorary degree as doctor of public education from his alma mater, UMBC.

Clements’ “Successful Project Management” book is now in its seventh edition and has been published in multiple languages and used in numerous countries.

Clements was born in Arlington, Va., but he spent the majority of his life in Maryland before relocating to West Virginia and then Clemson. He and his wife, Beth, have been married for 29 years and have four children, Tyler, Hannah, Maggie and Grace; two sons-in-law, Tanner Coombs and Max Kinser; a daughter-in-law, Margot Murray Clements; and one grandson, Cannon Coombs.