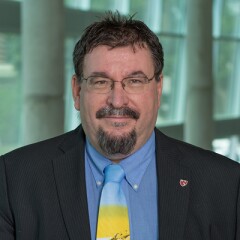 Dr. Mirnics earned his medical degree from the University of Novi Sad (Yugoslavia) School of Medicine in his hometown in 1986 and his Ph.D. from Semmelweis University in Budapest, Hungary, in 2010. He completed his postdoctoral fellowship at the University of Pittsburgh, where he established his own laboratory in 2000 in the department of psychiatry and rose to the rank of associate professor. In 2006, he moved his laboratory to the department of psychiatry at Vanderbilt University in Nashville. In 2010, he was named James G. Blakemore Professor of Psychiatry and served as the departmental vice chair for research and associate director of the Vanderbilt Kennedy Center, the oldest intellectual and developmental disabilities research center in the United States. In 2016, he joined the University of Nebraska Medical Center (UNMC) family, where he became the fourth Director of the Munroe-Meyer Institute for Genetics and Rehabilitation.

A well-recognized, disease-oriented neuroscientist, Dr. Mirnics collaborates with many scientists across the country and the world. His research group is working to understand the molecular basis of human brain disorders and find treatments for them. He uses a variety of genetic, molecular, cell biology, and behavioral tools across multiple diseases models. His innovative research has attracted more than $15 million of extramural funding from the National Institutes of Health (NIH).

Dr. Mirnics serves on the editorial boards of more than a dozen prominent scientific journals and numerous national scientific advisory committees. He has authored more than 100 scientific publications, which have been cited more than 10,000 times by other scientists. He has received multiple prominent national and local awards for his scientific endeavors and community engagement, including accepting the 2018 Help is Hope Award by Autism Action Partnership, and being named the 2019 Friends of Scottish Rite Honoree.

He is married to Zeljka Korade, DVM, PhD, Professor of Pediatrics at UNMC, and has two children (Marco and Emma). In his free time, he enjoys reading and fishing, and he is an avid chess player.