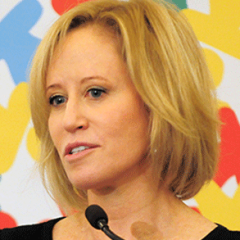 Ms. Samuel has over two decades of leadership experience in business, philanthropy, development of multi-stakeholder partnerships, and academic research. A pioneer in the field of social isolation and connectedness, Ms. Samuel currently serves as President of the Samuel Family Foundation, as Professor of Practice at McGill University's Institute for the Study of International Development, and as Director of the Samuel Group of Companies, a Canadian family business founded in 1855.

In both her philanthropic and academic work, Ms. Samuel focuses on overcoming social isolation as a critical experiential and measurable component of multi-dimensional poverty and other human rights challenges facing communities around the world. Through her efforts, Ms. Samuel has generated an emerging global movement dedicated to identifying policy and program solutions that build social connectedness.

In October 2016, she convened the second Global Symposium on Overcoming Isolation and Deepening Social Connectedness at McGill University in Montreal, which brought together leading thinkers, activists and community leaders from over 23 countries. Also in the Fall semester 2017, she designed and delivered the first academic course in the emerging field of social connectedness to graduating students of McGill’s international development program. In her ongoing leadership role in the emerging movement, Ms. Samuel acts as a speaker, commentator and author featured regularly in the Huffington Post and other media and scholarly sources.

As President of the Samuel Family Foundation, Ms. Samuel has actively engaged in a number of collaborative partnerships to advance advocacy and programming that supports social connectedness—including with the Synergos Institute, Nelson Mandela Children’s Foundation; and the Foundation for Community Development. In addition, Ms. Samuel plays an active and ongoing role as a board member of the Executive Committee of Special Olympics International. She is engaged in partnership with indigenous communities in northern Canada, including Misipawistik Cree Nation, in support of community-driven strategies for strengthening education and employment. Ms. Samuel also co-created the innovative Environmental Performance Index (EPI), now in its tenth iteration, with the Yale Center for Environmental Law and Policy and the Center for International Earth Science Information Network at Columbia University.

Previously, Ms. Samuel served as Visiting Scholar at the University of Oxford’s Poverty and Human Development Initiative (2013-2014) where she continues to serve as Policy Advisor. She is also a founding member of the Global Philanthropists Circle; and member of the Disability Rights Advisory Committee of Human Rights Watch.

The Samuel Group of Companies, founded in 1855, comprises a network of operations across North America engaged in the processing, manufacturing and distribution of steel and other metals.