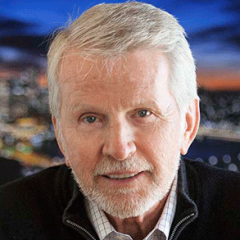 Mr. Lane is a Managing Partner at GreatPoint Ventures, a fund focused on using resources such as agriculture, water, and energy more efficiently; living longer and healthier lives (with food, biotechnology, and healthcare); and increasing productivity (for example, using robotics, software, etc.).

Ray is also a strategic advisor for Kleiner Perkins Caufield and Byers, after serving as managing partner with the firm for 14 years. Since 2000, Mr. Lane has focused on helping entrepreneurs with technological and market insight, organizational development, team building, selling, and managing growth.

Mr. Lane serves on the board of Hewlett-Packard and was its former chairman. He also serves on the board of trustees of Carnegie Mellon University and was its chairman for the last six years. Additionally he just completed eight years of service on the Board of Governors for West Virginia University. Ray also serves on several start-up boards that are associated with GPV or KPCB investments.

Prior to 2000, Ray was president and chief operating officer of Oracle Corp., one of the world’s largest software companies. During his 8 year tenure, Oracle grew from $800 million to more than $10 billion in business. Earlier in his career, he was a senior partner with Booz Allen Hamilton, where he pioneered and led the Information Systems Group, a worldwide technology consulting group for global enterprises. He served on Booz Allen Hamilton’s board of directors and executive management committee.

Mr. Lane received a Bachelor’s degree in Mathematics and an honorary Ph.D. in Science from West Virginia University. He was elected to the Academy of Distinguished Graduates and the Order of the Vandalia at WVU. The university honored Ray by naming the Lane Department of Computer Science and Electrical Engineering in its College of Engineering.

Ray was an active campaigner and planner for Carnegie Mellon’s establishment in 2002 of a Silicon Valley campus. He helped create and fund Carnegie Mellon's Lane Computational Biology Department, one of six permanent degree-granting departments in the School of Computer Science. He was also recognized with an honorary Ph.D. from Golden Gate University in 1995. And in 2011, Mr. Lane was honored by TechAmerica as its recipient of the David Packard Medal of Lifetime Achievement Award.