The opening ceremony for the 2019 World Games in Abu Dhabi, United Arab Emirates (UAE) proved to be an energetic and celebratory tribute to the spirit of competition and the power of inclusion. It was also a reflection of the biggest and most unified games ever.

In the UAE, those with disabilities are referred to as “People of Determination.” For the past six months, a team of People with Determination, called “The Makers,” have worked to create the vision behind the Opening Ceremony held at the Zayed Sports City Stadium. Their vision came to fruition with an inclusive musical production featuring a 500-person choir and 360 school children, representing dozens of nationalities.

In front of a full stadium and the largest television broadcast audience the Games have ever had, DJ Paul Oakenfold pumped up the crowd and ushered in the Parade of Athletes. Following tradition, the Special Olympics Hellas (Greece) delegation were the first to enter. They were followed by over 190 delegations comprised of over 7,500 athletes.

Hong Kong gymnast Lai Tsz, at age 10, is the youngest competitor at the Games. As she led her delegation into the arena, she jumped throughout her tour of the stage, expressing the joy that many in the stadium felt. Right behind her, in the group of athletes to enter the stadium, was golfer Marguerite Moroney of Ireland, the oldest athlete at the Games at age 69. 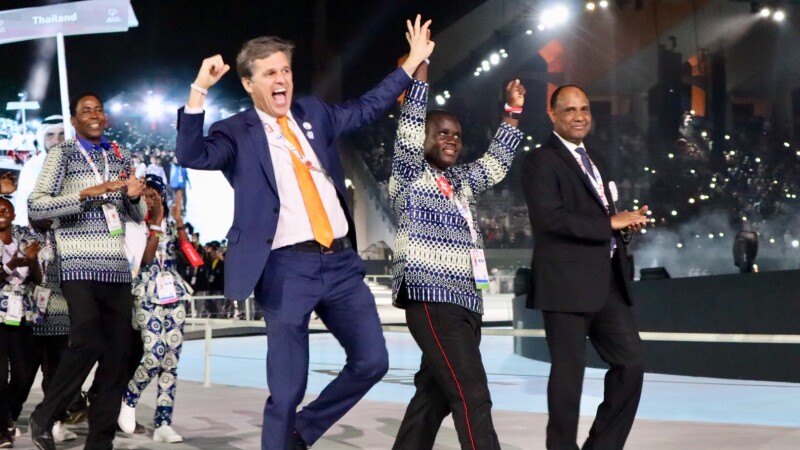 Tim Shriver, Chairman of the Special Olympics waves to the crowds at opening ceremonies while entering the stadium with Niyibikora Malachie, a refugee from Burundi, who is competing with the Tanzania delegation. 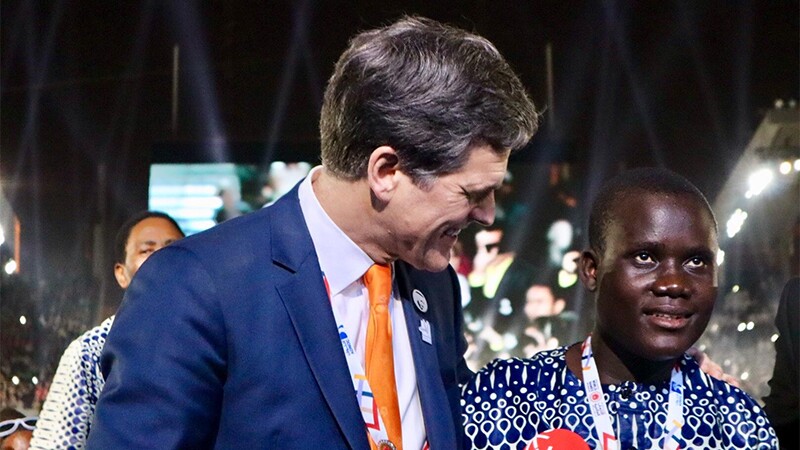 Timothy Shriver, Chairman of the Special Olympics waves to the crowds at opening ceremonies while entering the stadium with Niyibikora Malachie, a refugee from Burundi, who is competing with the Tanzania delegation.

Many delegations brought a sense of tradition to the Opening Ceremony that represented national pride. Countries like Moldova, Ghana, Philippines and Fiji wore outfits that reflected their cultures. Rather than walk during the parade, the delegation from Rwanda danced. Athletes from Samoa took a moment to pause during their lap of the stage to perform the haka, a traditional Maori ceremonial dance

Sprinkled throughout the delegations were celebrities, often from the home countries of the athletes they walked with. NBA legend Dikembe Mutombo was in stride with the delegation from the Democratic Republic of Congo and football (soccer) star Didier Drogba joined the athletes from Cote d’Ivoire.

Dr. Timothy Shriver, Special Olympics Chairman, walked next to Malachie Niyibikora, a runner representing Tanzania. Originally from Burundi, Malachie was found chained to a post in a refugee camp in Tanzania. Since being released, he has become a transformative figure at the camp through his participation with the Unified Football (soccer) team there.

When the UAE athletes walked in, the crowd roared. They cheered again when the Crown Prince of Abu Dhabi, H. H. Sheikh Mohamed bin Zayed Al Nahyan, waved to the hometown delegation.

After the UAE national anthem was played and its flag raised, Dr. Shriver gave a rousing speech thanking the Crown Prince and honoring the athletes. To the Crown Prince he said, “In a world of tension and division, you are a ripple of companion and a wave of compassion.” He called the athletes “Prophets of Tolerance.”

These World Games fall during the 50th anniversary year of Special Olympics. A video tribute honoring founder Eunice Kennedy Shriver played on the stadium screen. Watching in reverence were athletes and fans in the stands, including some of the 3,000 coaches, 6,000 family members and 20,000 volunteers at the Games.

Special Olympics World Games officially start when the Special Olympics Cauldron is ignited by the Flame of Hope. This part of the ceremony started with an inclusive team of flag bearers made up of Special Olympics and professional athletes. The athletes selected to play on Unified teams (teams comprised of people with and without intellectual disabilities) and are examples of inclusive teamwork. The flag was carried and hoisted up by:

Next, H. H. Sheikh Mohamed bin Zayed Al Nahyan stepped to the microphone to give the official opening speech. He was flanked by UAE athletes that hugged him as he began addressing the crowd. He said, “Today we send a message to the world that nothing is impossible when there is determination.” He went to tell the athletes, “Here in the UAE, everyone supports you and takes pride in you.” The Crown Prince demonstrated his commitment to inclusion by inviting the athletes on stage to join him in declaring that the 2019 World Games had officially begun.

After the athletes and coaches recited the Athlete Oath, drumming announced the entrance of the flame carried by an international group of Law Enforcement Torch Run (LETR) runners. Athletes who have demonstrated extraordinary leadership passed flames to each other’s torch until it reached the cauldron. The athletes, listed below, represented the seven Special Olympics regions.

The celebration concluded with a music performance by international superstar singers. Avril Lavigne’s song Fly was the anthem for the 2015 World Games. Luis Fonsi is best known for his world-wide chart topping hit Despacito. H.E.Hussain Al Jassmi, Emirati singer and Good Will Ambassador at Large, sang in both Arabic and English. They were joined by Tamer Hosny, Egyptian singer and actor, and Assala Nasri, Syrian musical artist.

As the last note was sung, the Opening Ceremony closed setting the stage for what promises to be an exciting 2019 World Games.