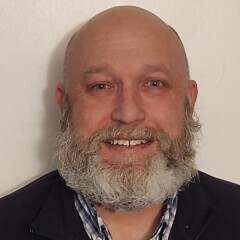 George was a collegiate gymnast at Kent State where he competed for 4 years graduating in 1991. In 1986, he became a nationally certified judge and then was Internationally certified judge (FIG) in 1998. He has judged numerous competitions from junior level boys, Olympic qualifier, international competitions as well as Special Olympics (from the local, State, National and International). He has been a part of the SOWG's since the 1995 games in Hartford, CT and has had the honor of being a TD of the last 2 (Los Angeles, CA and Abu Dhabi).

He is an electrical engineer and works at Stryker Instruments. He resides with his wife of 28 years and has 5 children (4 daughters and 1 son, and a son-in-law).