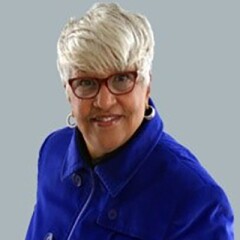 Brenda served as the Executive Director of the National Association of State Boards of Education (NASBE) from 1994 until 2012 and is an education leader and legislative professional with more than forty years of experience in policy development and analysis in education and human service issues.

Ms. Welburn began her career in social work, specializing in casework services to foster children and their natural and foster families. She later became a Research Analyst with the U.S. House of Representatives’ Select Committee on Assassinations. She later joined the staff of the late Senator Paul Tsongas of Massachusetts, covering a broad range of legislative issues, including education, health and human services, child welfare services, and civil rights. Following her retirement from NASBE, she became an independent education consultant with a practice in education policy. She also has turned her love of developing custom audio-visual slide shows into a small business, Aunt B Productions.

A graduate of Howard University with graduate work at the University of Pennsylvania, Ms. Welburn is one of the nation’s foremost experts on state education policy. She possesses professional expertise and a unique historical perspective on the evolution of education governance and policy developments at the state and federal levels. She has given workshops and presentations on state education policy both nationally and internationally. In addition to serving on the NELN, Brenda is the liaison to the NELN Advisory Council, which consists of previous NELN members. She also is a consultant to Special Olympics’ Unified Champion Schools.

Ms. Welburn is an accomplished writer and public speaker on issues affecting the nation’s students. She writes a blog, Channeling Joshua, examining education policy issues from a practical perspective. She serves on several boards, task forces, and commissions responsible for improving the health and welfare of children. The United States Army awarded her the Outstanding Civilian Service Medal. She published her first young adult novel, The Time Travels of Annie Sesstry, the story of three African American children who travel back in time to learn more about their history and ancestry. Her second book is in development.