As a college student in the 1980s, Martha Pachuta studied special education—and she also loved sports. One day she noticed a post about Special Olympics on the college noticeboard. The organization, which combined both of her passions, piqued her interest, and she knew right away that it would be a great opportunity for her.

Pachuta’s instincts were correct. The 62-year-old has now been involved with Special Olympics for more than 40 years in a variety of volunteer roles such as a coach, event director, and committee member. This work and the impact she’s made along the way have earned her the Annette Lynch Lifetime Achievement Award in 2022. The award, given by Special Olympics North America, honors coaches for their part in enhancing the development of Special Olympics athletes.

“This award confirms something we have suspected for decades: that Martha Pachuta is one of the most knowledgeable and impactful coaches in the country,” said Special Olympics New York President & CEO Stacey Hengsterman. “Martha stands out as a leader on and off the fields of play.”

After graduating from SUNY Geneseo in 1982, Pachuta started her first special education teaching position. It happened to be housed on her alma mater’s campus. “Our programs were very immersed in the beginning with Special Olympics, it was part of our day-to-day activities, and every staff member was always involved in working with the athletes to empower them to succeed,” Pachuta says.

As she became respected within the Special Olympics community, she took on a leadership role within her local Special Olympics program in the Genesee region. Her duties included assisting the strategic plan for competitions and events. Today, she serves as a volunteer sports director, for both the regional and state levels. She also acts as a clinician for new coaches, providing them with the necessary requirements for Special Olympics coaching certifications.

“When I first started coaching, we were presented with the guides and rules, and that was pretty much what our education was,” Pachuta says. “But as time has progressed so has Special Olympics. The age of technology, I believe, has been monumental in changing the resources that are out there for all of our coaches.”

Pachuta explains even though she has been coaching for 35 years, she still tries to educate herself through resources online. “As coaches, we all need to continue learning, even our more seasoned coaches. The partnerships that Special Olympics has developed with foundations in sport, communities and support organizations has also allowed us the opportunity to enhance our education,” Pachuta says.

Though Pachuta has been involved in Special Olympics in many ways, she says her 35 years of coaching are the most rewarding part of everything she does. Pachuta is a multi-sport coach, helping athletes train and compete in alpine skiing, floor hockey, golf, and volleyball, and she's most known for swimming. But no matter what sport she's coaching, it's her attention to bringing out the best in each athlete, like Jacob Babcock, that sets her apart. She and Babcock worked together on virtual activities at the start of the COVID pandemic. “She is a very nice coach, and she treats me very well,” says Babcock, who met Pachuta in 2017. “[As a coach] she tells me what to do and what not to do, and she calms me down when I get frustrated.”

Babcock has many good memories of Pachuta, but a particular competitive event stands out to him. Special Olympics New York hosted a small golf tournament during the initial stages of the pandemic and the two met as competitors on the course. “It was very cool,” he says about the opportunity to play against his coach. “She’s very competitive, and I am, too, so she pushes me to do my best and tries to make sure I’m always willing to help other athletes out.”

Babcock is just one example of the bonds Pachuta has formed with athletes over the years. She isn’t just a coach when the game is being played; she also tries to make an impact off the playing surface too. Pachuta hopes to see the world continue to become an inclusive and supportive place for people with intellectual disabilities. Understanding that their achievements, given the obstacles they must overcome, mean that much more.

Pachuta plans to continue her contributions to the movement of inclusion, and she says it’s the athletes and their successes that keep her going. “I hope Special Olympics can continue to provide those opportunities that highlight success and achievement and give individuals those skills that empower them to reach whatever goals that they want,” she says.

Pachuta has built a career doing just that. 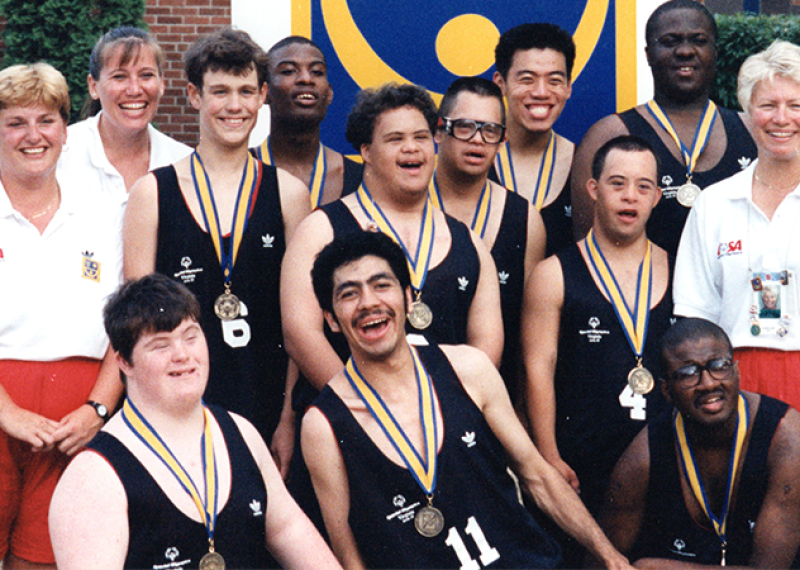