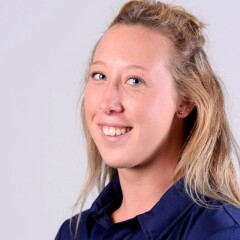 Why is it important for a Special Olympics athlete to evaluate bids for future World Games?

It’s important because it allows the athlete to voice their opinions and ideas from previous attended Games of what makes a World Games experience great and what countries that host World Games could do differently to make it bigger and better from an athletes point of view. Also, to make it an experience that any athlete can look back on and have life-long memories from.

What are you most looking forward to in this role?

I’m most looking forward to finding out what countries are bidding for the 2025 and 2029 World Winter Games. Also, seeing how a World Winter Games is run from behind the scenes compared to being an athlete competing in it.

What World Games have you competed in and in what sports?

What advice would you share with Special Olympics athletes who are training to compete at a World Games?

Make sure you have a passion for whatever sport you play because it makes training so much more enjoyable. Use every training and competition as a stepping stone to work on your strengths as well as your weaknesses. Always set long and short-terms goals as motivation. Always learn from and look back on previous sessions and competitions you have won or lost at and always take a positive thing out of it. The next four years may be a roller coaster of high, lows, lots of blood, sweat and tears, ice baths, early mornings and late nights, and injuries. Enduring these things will make you a better, smarter athlete at the end of the day.

I have two female role models: Lindsay Vonn and Bethany Hamilton. Lindsay Vonn is an American Alpine Ski Racer who has won 82 World Cup ski races throughout her career. She has endured career-ending injuries multiple times and has come back stronger and better after each injury after completing countless hours of rehab for each injury.

Bethany Hamilton is a Hawaiian surfer who was surfing out on a reef when one of her arms was bitten off by a shark. She now surfs with one arm and has succeeded in the surfing world ever since, surfing the world’s most dangerous waves. After countless hours of rehab and training to keep her body strong, she is now making a positive impact out of a traumatizing incident.