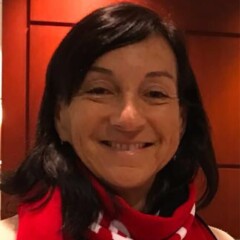 What does a Technical Delegate do?

The TD advises the local organizing committee (LOC) on the technical requirements of the specific sport to ensure a safe, quality and dignified sports environment. The TD is the final authority on each of these matters: rules, competition schedule, field of play, equipment, volunteer staff, competition management team, technical officials, coaches meetings, sanctions, sports publications, results, and more.

I would suggest for them to get involved with Special Olympics because it is worth it every moment we get to spend with athletes.

What challenges do you see in increasing female participation in sports and what can we do to solve them?

Many women may see it as a more masculine role and do not want to be working with more administrative functions or as a sports manager. We should show that is possible for everyone and does not depend on gender. A woman can have the same roles with the same level of success.

Eunice Kennedy Shriver. She has transformed the lives of millions of people around the world, including mine.