Gazing into the camera with her genuine smile, Amy Wiesenhutter shares the story of how she found her passion for coaching Special Olympics Texas through mentor Patsy Reyna Henry's considerable influence on her life. Volunteering at events throughout her childhood, it was only a matter of time before she turned that passion into a lifelong mission, discovering the "snowball effect" that Special Olympics has on all the people it touches.

When reminiscing on her time in middle school, Wiesenhutter shares the story about how Henry, who at the time was an adaptive physical education teacher, got her students involved with Special Olympics. Getting the kids to volunteer made an impact on everyone, but for Wiesenhutter, it was a defining moment.

"She's the reason that I have chosen this career path and she's a huge, huge mentor and somebody that means the world to me," Wiesenhutter says about Henry.

Still to this day, they communicate regularly. "I'm fortunate enough to sit here and say she's one of my dearest friends," Wiesenhutter says about the impact Henry’s had on her life, including all that she has accomplished throughout her career.

Henry is likely quite proud of her former student and for good reason! After many years of coaching, Wiesenhutter was nominated for the Special Olympics North America Outstanding Coach award, but is quick to pass the credit to those around her. "I feel like this is more of a team recognition because you're only as strong as the people you surround yourself with," Wiesenhutter says with a lot of enthusiasm resounding in her voice. "I've got some amazing coaches and volunteers that help make our program what it is."

One common thread among Special Olympics coaches is that the position holds more meaning than just athletic results. With a deep love for flag football and being from a state where the passion for the sport is just as big as the state, Wiesenhutter knows the importance of having a successful program. However, what sets her apart from other coaches is the relationships built away from sports.

"For me, it goes beyond just the coaching aspect of the athletes and their respective sports; it's all about investing in them and making sure they know that they are important and that they can be a vital part of the community," she says with much pride.

For years, Wiesenhutter has been working closely with Special Olympics athlete Benji Garcia, who was exceptionally shy. With Wiesenhutter's guidance, coaching, and friendship, Garcia broke out of his shell and started doing public speaking events.

Garcia shares his message speaking clearly with a solid call to action when standing at the podium. He now realizes his story can impact others like him. And it wouldn't have been possible without Wiesenhutter. Garcia says she helps him practice what he will say so that he is ready when the camera is rolling or there are people around.

From serving as the announcer of the Hendrickson High School softball team to emceeing for the school's Special Olympics Unified Champion Schools® banner celebration with ESPN's Jen Lada, Garcia has grown by leaps and bounds, thanks to Wiesenhutter.

"She helps me out whenever I have trouble with something or if I need advice," Garcia shares, also adding that, "Amy teaches me things that are sometimes hard for me to hear, but I do not like to disappoint her (or anyone else), and so I always listen to her and learn so that next time I can be better."

"In her 20 years serving as a coach, Amy has demonstrated her dedication to the Special Olympics Texas Program and athletes in various ways," Tim Martin, President and CEO of Special Olympics Texas, says. "She is genuine and intentional with each relationship she builds and is able to help every athlete, Unified partner, coach and volunteer develop challenging yet attainable goals for themselves."

Because of the COVID-19 pandemic, Special Olympics canceled all in-person activities. When Special Olympics Texas shifted to virtual means to stay connected, Wiesenhutter was at the forefront of making decisions on how to serve athletes best. "Currently, Amy serves on the Special Olympics Texas re-launch and mitigation committees to provide her expertise as a coach on the best way to keep our athletes involved yet safe during the current pandemic," Martin says.

"The purpose of the committee was to get our athletes back to play with safety at the forefront," Wiesenhutter says. "I was a part of the committee as a whole as well as a part of a sub-committee for golf and athletics where we came up with the safety protocols for the different phases, leading back to normal play."

Special Olympics Texas provided athletes with opportunities to stay engaged through the most challenging time, with various activities through their all-virtual S.O. Connected program, including nutrition instruction, workouts, and esports.

"From a district standpoint in Pflugerville, some of the things that we did to keep athletes engaged included virtual dance parties, a virtual end-of-the-year banquet and a virtual cooking class led by one of our athletes who is an aspiring entrepreneur," Wiesenhutter says. "We also hosted a drive-by parade where athletes came and drove through a parade of coaches, volunteers, district leadership and local and district law enforcement officers."

"Never in my wildest dreams did I think that we would get national recognition," Wiesenhutter says.

With a career full of accolades and many firsts, Wiesenhutter says her most significant highlight is Garcia himself. When Garcia was a freshman, he told his teachers that ESPN would show up before leaving high school. "He is a big ESPN guy," she says, expressing that when he was a senior, "that dream became a reality."

And while she goes the extra mile for all athletes, it's a unique feeling when she can coach her athletes. "In Seattle, I was a little nervous because I was going to coach athletes that I had never met, even though they were from the state of Texas," she says. "I will be in Orlando [for the 2022 Special Olympics USA Games] coaching flag football, but I will be coaching my own athletes. So, I'm definitely looking forward to that because that will be a first for me as well."

There's a lot to be grateful for regarding the growth Wiesenhutter has seen in Special Olympics, but most importantly in her community. "I think the biggest changes I've seen are right here on my shirt 'Unified Generation' and just the inclusive movement," she says. "I've seen it firsthand here in Pflugerville, and it's been life-changing."

Hendrickson High School's students and staff bought into the inclusive environment, and in just two years, it has paid off. Athletes and Unified partners have bonded over friendships while finding success in sports. Wiesenhutter has made such a strong impact that Special Olympics athletes have ventured off to experience different things, such as public speaking and pushing themselves in sports. There is an unbreakable bond between the students who are part of the Unified program at Hendrickson.

As the interview for this story was nearing the end, Wiesenhutter, who was still grinning ear to ear, shares a unique piece of hardware. "I've got my ring on this morning," she says. "We were able to get UCS national championship rings." It's a ring representing a team, a school and a community--one that mirrors the impact her mentor had on her Special Olympics roots and one that reminds her there is much left to accomplish. 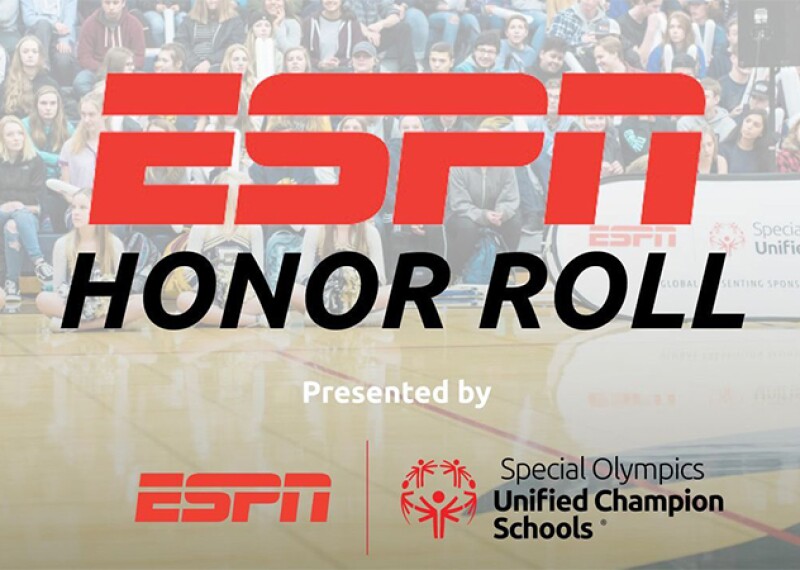 In the News
ESPN Announces 2019 Top 5 Schools
Special Olympics would like to congratulate this year's ESPN Top 5 Special Olympics Unified Champion Schools® for their dedication to inclusion.
1 Min Read