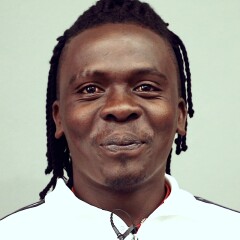 Boniface Kimeu was born in Malindi town in Coast Province, Kenya. He is a third born in a family of four, two boys and two girls. His family is poor and this made his childhood hard. He had poor health when growing up and difficulties in communicating. This posed learning difficulties for him when joining school, such that when he reached class four, he could not keep up with other pupils in his class. It was then that his teacher transferred him to a special education school near his home.

He became interested in sports and discovered his talent in football as he continued participating in school games. He joined Special Olympics games in 2009. He participated in local competitions and was selected to compete at the National level in the same year. This was his first time to be exposed to large crowds of people. It was a very exciting moment for him. Since then, Boniface has received a lot of support from his family and the community at large in developing his talent in sports. They also supported him in acquiring sports accessories for training. He now has a renewed spirit and life has really changed for the better.

Boniface continued to train and play to develop his talent in football further, and in the year 2010, he was selected to participate in the Unified Soccer National Competition. His performance was excellent, and he was selected along with 9 other Athletes to represent Kenya in the Africa Unity Cup Football Seven-a-Side Competition in South Africa. Boniface says this was a turning point in his life, as he had never imagined he could achieve and experience so much within such a short time. Special Olympics turned his life around and he feels like a new person.

In 2012, he was selected to attend Athlete Leadership Programs (ALPS) Training in Nairobi, Kenya where he gained skills in leadership and in public speaking.

In May 2014, he was elected the Chairperson of Athlete Input Council (AIC) for Special Olympics Kenya program. He is a gold-medalist who competed in the Special Olympics World Summer Games held in Los Angeles, U.S.A., in 2015.

Since 2018, he has attended Africa Region Athlete Congress, Regional Youth leadership Summit, and several Africa Leadership Conferences. Through the training, he has gained a lot of courage and confidence. He has served in the Regional Athlete Input Council (2018-2022) as an official. Boniface was the Captain of Special Olympics Kenya football team that participated in the first ever PAN-Africa games in 2020 in Cairo, Egypt. He is a trained Healthy Messenger and the current Africa Region representative in the Global Athlete Leadership Council (GALC) 2021-2023. Boniface is married and has one daughter.

“Special Olympics has made me the person I am today. I have traveled to many countries, learned different things and made friends with many people around the world. Being part of Special Olympics has given me the courage, skills and determination to start a shop business out of which I support my family and offer employment to the youth in my community”