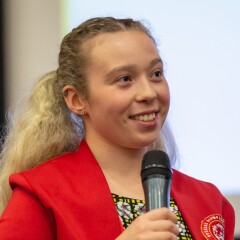 Kiera Byland is 22 years old and she has been a Special Olympics Great Britain athlete since 2014. Kiera has numerous learning disabilities; despite them, Kiera has been able to achieve so many wonderful things and she is a true leader and ambassador for inclusion.

Kiera helped to create a pilot called "The Kiera Project", to inspire other children and young people with an intellectual disability to never assume you cannot achieve, to always hold onto your dream and that it can come true. Kiera has been on regional and national TV, interviewed at local and regional radio stations and newspapers, switched on the Christmas lights in her hometown, delivered numerous presentations to a variety of audiences and had the opportunity to ask a question to the Children's Minister for Great Britain.

Kiera has attended full time college and has achieved a BTEC level 2 in Sport, a Level 2 British Cycling qualification and a level 2 swimming teaching assistant qualification. Kiera also launched a pilot project enabling very young children with intellectual disabilities to learn to ride Strider balance bikes, so they can start to enjoy sport from an early age.

Kiera is truly an inspiration to not only her peers but to children and adults alike. She is a fantastic trainer and the children love her. The success of this project led to Kiera becoming a Strider Balance Bikes Ambassador with Greater Sport. In addition to being part of athlete committees, Kiera recently became a Board member for Special Olympics Great Britain Board of Directors.