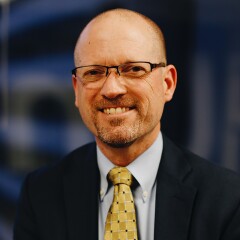 As Chief Financial Officer, Jim Barbee is responsible for all finance and accounting functions and leads a dedicated, professional team in the areas of financial planning and analysis, grants management, financial reporting, government and regulatory compliance, and business decision support. Barbee joined Special Olympics in 2018 as Vice President of Finance & Controller and assumed the CFO role in April of 2021.

Barbee brings 35 years of progressive experience to Special Olympics having led teams in both corporate and nonprofit sectors. After four foundational years in public accounting, Barbee led the finance teams for two privately held companies in North Carolina. Being drawn to do work that had a bigger purpose, Barbee made a move that led him into the nonprofit sector, where he served as Director of Accounting for an international anti-slavery organization. Prior to that, Barbee was Director of Financial Operations for a large international relief and development NGO for nine years. He also served for 15 months as the NGO’s Country Director after a natural disaster in the Philippines. There Barbee gained a much deeper understanding of the many challenges facing vulnerable people who live in challenging places.

Barbee received his Bachelor of Science in Business Administration with a concentration in Accounting from the University of North Carolina at Chapel Hill and is a licensed Certified Public Accountant. He and his wife, Laura, live in Northern Virginia and have 4 grown children, two sons-in-law and four grandchildren. In his free time, Barbee enjoys hiking, playing golf, and spending time with family and friends. He also volunteers with an organization he co-founded, serving as senior advisor to Side by Side Alliance, Inc., a small nonprofit doing poverty alleviation work in some of the most vulnerable areas in the Philippines.