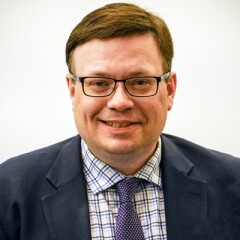 Shawn Ferguson currently serves as Vice President of Government Relations and Chief of Staff to Chairman Timothy Shriver at Special Olympics. In his dual role, he works closely with the Chairman on executive leadership of the organization and is the head of Special Olympics’ interaction with governments in the United States and around the world. Since he began leading Government Relations, Ferguson has overseen an increase in U.S. federal funding by nearly $12 million USD to a total of $31 million USD per year for education and health initiatives.

From 1999 to 2010, Ferguson served in U.S. Senator Kent Conrad’s (D-ND) office, eventually becoming the Senator’s Senior Advisor. During his time in the Senate, Ferguson was the lead staffer on two pieces of enacted veterans’ legislation, a $25 million USDA transportation research program authorization in the 2008 Farm Bill, and a federal matching share for a $35 million dollar state veterans’ home. Later, Ferguson served as Legislative Director for Congressman Brian Baird (D-WA), functioning as the lead policy analyst and advisor to the Congressman, directing a six-person legislative staff, and representing the Congressman at legislative strategy meetings with US House Leadership staff. Prior to joining Special Olympics, Ferguson was a personal assistant to Daniel Snyder, owner of the Washington Redskins NFL Football Club, and Lead Director of the Redskins Executive Office.