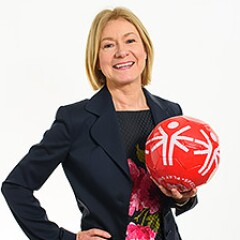 Mary Davis is the Chief Executive Officer of Special Olympics. She has been a longtime leader within the Special Olympics movement and currently leads an international team of over 250 professionals throughout the world.

Davis started with Special Olympics soon after college as a local program volunteer and coach. Since then, she accomplished a great deal in a series of leadership roles, including:

Davis was awarded a Person of the Year Award for her work on the 2003 World Summer Games and her years of service with Special Olympics Ireland. She is married to Julian Davis and has four children: Jonathan, Rebecca, Emma, and Patrick. Davis is an athlete; she has run the New York City Marathon and climbed Mount Kilimanjaro and Mount Blanc.