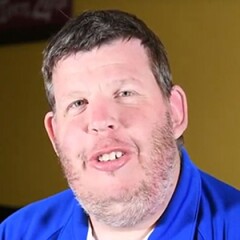 Born with an intellectual disability and a cleft palate, which left him with slurred and stuttered speech, Dustin found it difficult to make friends with other kids. His struggles came with the additional burden of an unstable home life, moving often from home to home and family member to family member.

In 2004, Dustin’s life was more than guided by Special Olympics, it was saved. During a visit to the Healthy Athletes Village for a dental screening, a volunteer dentist told him that the condition of his teeth was quite bad and that he would need to be examined by a local dentist. It was during that next visit the doctor gave him some scary news; he had gum cancer. Though the treatment procedure was difficult and painful, his cancer was caught early enough to be treated and cured thanks to the Special Olympics Healthy Athletes program and the volunteer dentist who spotted the issue.

Given a second chance, Dustin relishes every opportunity to reach people and to share his own story of success over adversity as a way to inspire others to do the same. Special Olympics has helped empower him to take control of his own life and to break the negative cycle that defined his early life. Dustin is active in the community and works with teens with and without disabilities in a social, educational, mentoring and athletics program at the Lakewood Recreation Center in Southern California. He continues to give back as a coach for young athletes in basic sports skills.

Dustin has now been active in Special Olympics for almost 25 years, rising in the ranks of athlete leadership as a Sargent Shriver International Global Messenger from 2007 to 2010. The once insecure, shy kid is now a dynamic, articulate public speaker and advocate who has stood alongside the likes of Yao Ming at the World Games in Shanghai and President Barack Obama at the White House.