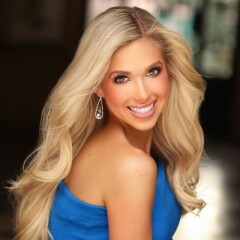 The current Miss Kansas USA, Gracie Hunt’s sporting roots run deep. Her grandfather founded the KC Chiefs, FC Dallas, and the Chicago Bulls. Gracie has worked with the NFL Women’s Apparel initiative since 2012 and has also worked with FC Dallas and the Chiefs. Her experience in the sports industry as well as putting on soccer clinics around the world, has shown her how sports transcend the barriers society imposes.

In 2015, Gracie became involved with Special Olympics as a Unified partner player on the FC Dallas Special Olympics soccer team. In 2018, she began sideline reporting during Unified matches, eventually coming to serve on both the SO Texas and SO Kansas boards. Gracie is currently spearheading the Kansas City Chiefs Unified Challenge with big plans for where the inclusion revolution can go.