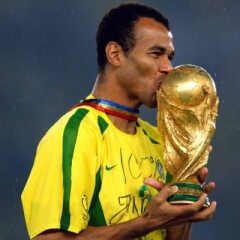 Marcos Evangelista de Morais (born 7 June 1970), known as Cafu [kaˈfu], is a Brazilian former professional footballer who played as a defender and was voted into the the All-Time Greatest XI at right full back.

With over 150 appearances for the Brazil national team, he is the most internationally capped Brazilian player of all time. He represented his nation in four consecutive FIFA World Cups between 1994 and 2006, and is the only player to have appeared in three consecutive World Cup finals, winning the 1994 and 2002 editions of the tournament, the latter as his team's captain in Yokohama, Japan.

With Brazil, he also participated in four editions of the Copa América, winning the title twice, in 1997 and 1999; he was also a member of the national side that won the 1997 FIFA Confederations Cup.

At club level, Cafu won several domestic and international titles while playing in Brazil, Spain and Italy; he is best known for his spells at São Paulo, Roma and Milan, teams with which he made history.

Cafu was a World and Club Champion in Japan with Brazil, Sao Paulo and Milan.

Post retirement Cafu has dedicated himself to charitable work, including his own Foundation. Fundacao Cafu is located in Jardim Irene where Cafu was born and grew up. His pride and love of this community demonstrated by the words written on his shirt before lifting the 2002 World Cup - "100% Jardim Irene".

A modest and humble man he is widely respected in the sporting world as the "professional" professional and statesman. A true role model in sport.