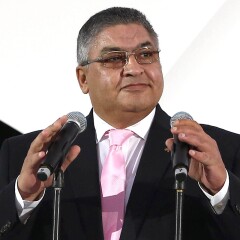 Ayman Wahab oversees program operations in 23 countries in the Middle East and North Africa providing strategic direction and engagement with the public and private sector to raise awareness and gain support. He also leads fundraising efforts for the region.

In 1997, Wahab, a successful businessman, was elected to the board of directors of Misr Language Schools, which also served as the headquarters for Special Olympics Egypt. After serving as a volunteer, he became National Director of the program in 1998. In just two years, the program grew from 2,240 athletes to more than 15,000. In 2000, Wahab was chosen to lead the Middle East/ North Africa region as its first-ever Regional President and Managing Director. Under his leadership, registered athletes grew from 20,433 to nearly 130,000 in only eight years. To date, Wahab has supervised nine MENA Regional Games, including working together with the first-ever fully independent Regional Local Organizing Committee on the ninth Games held in Abu Dhabi in 2018. Wahab supported the biggest and most unified Games ever held in the history of the movement, the Special Olympics World Games Abu Dhabi 2019, which have engaged an unprecedented 200 nations, 7,069 athletes, 20,000+ volunteers and 500,000+ spectators. In 2003, he was named to the Special Olympics International Executive Management Committee.

The International Olympic Committee honored Wahab with its certificate of merit for his contributions in the field of intellectual disabilities in 2002. He currently lives in Cairo, Egypt and was appointed by Egyptian President Abdel Fattah El Sisi to the Presidential Highest Advisory Panel.