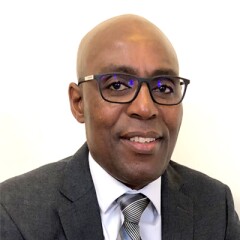 Charles oversees program operations to 38 countries in Africa. He provides strategic direction for both the government and private sector officials to raise awareness and support the creation of partnerships.

A few highlights of Charles’ many accomplishments include qualifying as a FIBA International referee and winning the 2004 National Sports Administrator of the Year Award by the Namibian National Sports Commission. He was also appointed as a Namibia National Olympic Committee Assistant Trainer and served as a facilitator for the World Scholar Athlete Games in New York City.

In 2021, Charles was appointed to serve on the Global Board of Directors of the International Coaching Federation (ICF). Later that year, the Namibian Sport Commission nominated him to receive the prestigious Lifetime National Award, the highest award of an individual for contributing to sport development in the country.