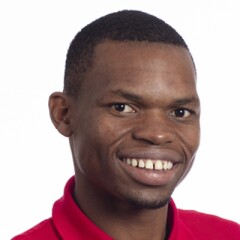 As a Special Olympics Sargent Shriver International Global Messenger (SSIGM), Nyasha Derera hopes to become a voice for the voiceless. He believes that because he faced many challenges in life and went on to achieve many successes, he can use this opportunity to inspire others. His dream is to attend a University where he can obtain a degree that will allow him to make a difference in people’s lives.

Hailing from Zimbabwe, Nyasha holds a number of leadership roles within Special Olympics. At the 2018 Global Athlete Congress in the Dominican Republic, his fellow athletes elected him Chairperson of the Congress. As part of this role, he serves on the Special Olympics International Board of Directors. He is also a Global Health Messenger, advocating for health by teaching healthy habits and everyday fitness.

In addition to being a leader within Special Olympics, Nyasha is an accomplished short and long distance runner. In Zimbabwe, he holds an impressive record of 17 gold medals, 6 silver medals, and 1 bronze medal. He competed at the 2015 Special Olympics World Games in Los Angeles where he won a bronze medal.

At an early age, Nyasha was labeled “crazy” and placed in special classes where he was isolated without friends. He was self-motivated to train in athletics and decided to join his schools team. He did not perform well the first time he competed and was called “useless” by the other students. This made him train even harder leading him to win his next race.

In 2012, Nyasha joined Special Olympics when it was introduced at his school. Joining Special Olympics gave him the confidence to become a school leader. He began his leadership role by sharing his inspirational story with younger students. As a result, he has become a motivational speaker spreading messages of hope, inclusion, and goal setting.

He volunteers at schools in his community providing competitive readiness training on how to become an effective athlete and student. His other volunteer activities include officiating at soccer and athletic competitions. He is also a member of the Lions Club and volunteers with an organization called Restless Development that empowers youth to solve the world’s challenges.