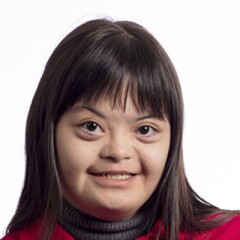 Born with Down syndrome, Brina has spent her life proving the world wrong.

When she was nine days old, a doctor told her parents that she might not live long because she had a hole in her heart and because her condition was very bad.

Today, she is already 25 years old.

When she was ten years old, a psychologist told her parents that she may not finish grade school because her IQ was very low. She proved the psychologist wrong. Her intellectual disability did not hold her back from finishing Pre-school, Grade School, and High School in regular schools and at appropriate age levels. Furthermore, she graduated from High School as class Valedictorian. Even further, within a span of 4 years, she was able to obtain her certificate in General Clerical Skills, an Associate in Arts degree, and a college Bachelor of Arts degree, majoring in History.

Today, she is an Assistant Teacher at a regular preschool, a commercial model, an actress, an inspirational speaker, and an advocate of Inclusive Education.

Growing up, she studied in schools where she was bullied and called names. Brina recalls, “They excluded me from their games because I was too slow. There were schools that did not accept me because I was not smart enough.” She has never allowed the negativity to get her down. Strong family support has also helped her defy the odds.

Today, Brina is an inspirational public speaker with a stellar list of accomplishments. She was selected as a Global Youth Ambassador for Special Olympics, representing the Asia Pacific Region during the 2013 Special Olympics World Winter Games and the 2015 World Games. She has shared her personal story and advocated for people with intellectual disabilities both within the Philippines, where she lives, and globally. She has appeared in television ads, starred in a movie, and even been invited to dinner with former U.S. President Barack Obama. She is now a Special Olympics Sargent Shriver International Global Messenger (SSIGM). She is passionate about her role as an International Global Messenger, meeting and making many friends all over the world. Most importantly, she is passionate about promoting love and respect for people with intellectual disabilities by sharing powerful stories of courage, hope, acceptance, and dignity. Brina’s personal story is powerful and beautiful—braving the bullies and ridicule, hurdling developmental and metal challenges, working very hard, persevering to graduate from college, and being gainfully employed showcasing her impact as a member of society.

Recognizing her educational struggles and perseverance in regular schools due to her severe intellectual disability, the United Nations chose Brina as a UNESCO Global Champion for Inclusion in Education. Her very story is her advocacy.

Brina says, “Every day, people with intellectual disabilities suffer rejection and ridicule because others think we are not good enough. They are wrong. We can do more and be more, if only the world gives us a fighting chance. As a Unified generation, let us stand together and declare that all people matter!”