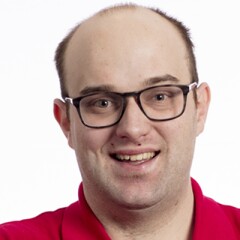 Daniel Smrokowski is an award-winning and veteran podcaster, columnist, and an acclaimed advocate telling disability stories on his groundbreaking, global platform Special Chronicles reaching thousands of people each month. As a digital media creator, he produces podcasts, videos, blogs, columns, and does public speaking to give respect and voice to people with special needs. Daniel educates and informs our communities that those with different abilities bring unconditional love and joy every day. Even though Communication is Daniel’s biggest struggle it has been his biggest passion.

It all began when he became a Special Olympics athlete in his home state of Illinois competing in swimming and basketball. He is starting training in Unified Bocce and looking forward to having his mom as his Unified partner. Special Olympics gave Daniel the voice to make an impact in the world beyond sport. Early on, he decided to hone his skills by attending Roosevelt University in Chicago, graduating with a Bachelor of Arts degree in Journalism. While at Roosevelt, Daniel received the Matthew Freeman Award for Social Justice for his continuing efforts via media and reporting to give people with disabilities a voice.

Daniel has received many awards for his work, but one of his proudest achievements was being a member of the Special Olympics 50th Anniversary Marketing & Communications Committee. He worked Unified, helping his colleagues develop and initiate communications and media relations. Perhaps his most notable contribution was being a columnist for the Chicago Sun-Times.

Daniel is one of the four original Special Olympics athletes hired by our global partner, United Airlines. He is employed as a Service Ambassador and currently serving on Bridge, United’s business resource group, connecting people of all abilities. United continues to take inclusion to new heights expanding their unified employment program. United has supported Daniel’s Unified at work podcast series which is sponsored by Bridge. Unified at work is a Special Chronicles original series featuring conversations about the meaning of inclusive employment.

Daniel is currently serving on the advisory team of a feature documentary that follows a team of U.S.A. athletes as they train, prepare and travel to Abu Dhabi to compete in the Special Olympics World Games. The film is expected to be released in early 2023.

In 2023, he will attend the World Summer Games in Berlin, Germany as an SSIGM. He hopes to contribute as a media expert to serve Special Olympics and his fellow athletes throughout the globe.

When not speaking or training, Daniel can be found creating new content, spending time with his girlfriend, family, and young niece. He enjoys riding his bicycle, taking walks, and streaming entertainment. To quote his mother, “If all the world were like Special Olympics, then there would be no wars.”