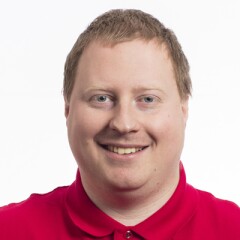 Providing a voice to the voiceless is a main motivating force in Ian Harper’s life. When approached by Special Olympics to become a Sargent Shriver International Global Messenger (SSIGM), Ian seized the opportunity. But he wasn’t just thinking about himself when he made the decision.

“Every time I go on stage or speak in front of a group of people about the work of Special Olympics, part of me is thinking about my brother and the other part is thinking about all of the people with intellectual disabilities who don’t get these chances.”

Ian’s younger brother is non-verbal. Growing up together in the West Midlands in the United Kingdom, the two brothers developed a strong relationship even though communicating was challenging.

“There are so many people in the world who don’t have a voice, like my brother, or who are prevented from speaking their opinions for different reasons like discrimination. I feel very proud to be taking on this role as a Sargent Shriver International Global Messenger and showing the world what we are capable of.”

Ian has a busy schedule in his various roles for Special Olympics. His most recent high-profile engagement saw him co-host the Global Youth Leadership Forum in Baku, Azerbaijan.

He is also a talented presenter and has supported Special Olympics in its work with corporate partners. Sport continues to be important, and Ian is a committed athlete with Special Olympics Great Britain. In 2017, he competed in athletics at the Special Olympics National Games in Sheffield, and he trains weekly at his local club. Ian also holds a part-time role as Service Quality Director for Thera Trust, a national charity that provides vital support for people with learning disabilities and complex needs. Perhaps Ian’s most impressive talent is spinning the decks as a DJ, a role which has seen him play gigs all over the United Kingdom. “I’m looking forward to the day that we launch Special Olympics FM.” So watch out world—there is no limit to what this SSIGM can achieve!