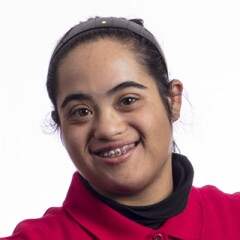 Maryam, an athlete leader from Kuwait, is 19 years old. She first got involved with Special Olympics in 2018, when she participated in the 9th Special Olympics Middle East North Africa Regional Games. She was one of the athlete leaders active on the ground as games evaluators, and her work has had a large impact on the Region’s preparations for the 2019 World Games in Abu Dhabi. She feels her life has been changed since then and that Special Olympics has given her the chance to express herself, speaks about her views, and share her hopes for a better future.

As an athlete, she loves bocce, athletics, swimming, and basketball. However, bocce is her favorite. Her favorite icon is the footballer, Mohamed Salah.

Maryam has been enthusiastically utilizing her strong personality to spread awareness, promote inclusion, and drive change in her community. As a Sargent Shriver International Global Messenger, she is outspoken, and she keeps an eye on how she can transform ideas into positive actions to end discrimination and bad attitudes towards people with intellectual disabilities. She hopes for an inclusive world that leaves no one behind. To help achieve this, Maryam will be working to advocate for inclusion in schools, clubs, malls, and media as she’s eager to help in ending bullying and stopping the use of the r-word. She believes that Special Olympics Unified sports is the gateway for inclusion.

In her own words, Maryam describes herself:" I am a leader; I am strong with a passion for sports." She credits her parents’ strong support for her success.

When not doing sports, Maryam enjoys reading and has big plans for the future. She wishes to open a nursery as she wants to help families and children, and her project’s mission is to bring children with and without intellectual disabilities together to learn and play. She is eager now to develop her English language skills.