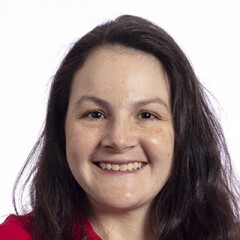 Renee Manfredi hails from Hawai’i & has been a Special Olympics athlete for over 14 years, participating in soccer, basketball, swimming, & softball. She competed in the 2018 Special Olympics USA Games in soccer where her team won the gold! She was also chosen as the Female Athlete of the Year for 2018. Because her father served in the Navy, she has had the opportunity to live in 7 different places ranging from Hawai’i to Bahrain & has had the opportunity to experience the diversity of many cultures and attitudes of inclusion. Renee just recently moved to Texas where she is already involved with Special Olympics Texas.

Renee experienced a lot of hardship while growing up, especially in school where fellow students, & sometimes teachers, did not accept her for who she was, a person with an intellectual & developmental disability (IDD). She was often belittled, isolated and left out. The struggles she faced are why the message of inclusion is so very important to her. It is her goal that people with IDD are valued in all aspects of life.

After moving to Hawai’i, she and her family found their ‘Ohana (“family” in Hawai’ian) in Special Olympics. “For me, joining Special Olympics was like walking through a door into a world full of possibility & opportunity”, says Renee. This is where she gained the confidence to become a Global Messenger for Special Olympics Hawai’i & find her voice. Renee is passionate about telling her story of what her life was like before she joined Special Olympics & her life now. She also hopes that her story will inspire change towards acceptance & inclusion.

Renee shares her story with everyone she comes into contact with and has stepped into multiple leadership roles that offer her unique opportunities to spread the mission of Special Olympics. She is a Health Messenger, a Sargent Shriver International Global Messenger and has served on the Special Olympics Hawaii Board of Directors as the Athlete Representative. She is a recent member of the Hawaii Developmental Disabilities Council, serves on the Support Parent Information Network Advisory Committee of Hawaii, serves as the Chair for the Participants Council on a federal grant with Shirley Ryan Abilities Labs, serves on the Advisory Committee for the Valuable 500 and is a Toastmaster. Renee was the Athlete Leadership & Healthy Communities Assistant for SOHI until her recent move to Texas, where she accepted a position with Special Olympics International as a consultant.

Renee’s main goal is the mission of inclusive health & better health care for persons with intellectual & developmental disabilities (IDD). Through her platform as a Health Messenger, she has engaged with doctors & other medical professionals to bring awareness of the health disparities that individuals with IDD face & encourages them to look past a person’s disability & into the true health issue. She believes this will give better health outcomes to individuals with IDD & is the key to inclusive health.

Renee is also an accomplished singer. She has performed during Special Olympics Hawai’i’s Opening Ceremonies, won the Extraordinary Abilities Hawai’i Stars television talent show in 2007, & most recently, sang the National Anthem for the Boston Red Sox in 2019 at Fenway Park.

Renee is on the Autism spectrum & has learning disabilities but that is not what she hopes you see. Renee’s hope is to be seen for her abilities & not her disabilities. She believes that everyone has gifts & abilities to share, they just need the opportunity to show what those talents are. Renee says, “Special Olympics took me from the sidelines of life & put me on the playing field. They looked past my disability & saw I had abilities & for that I am forever grateful.”