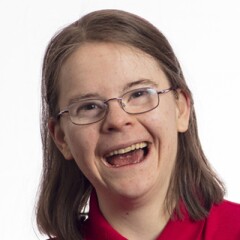 Hanna Joy Atkinson, 27, was born and raised in Littleton, Colorado. Hanna represents the North America region as a Sargent Shriver International Global Messenger. She also serves as a Health Messenger and has represented Special Olympics Colorado at Capitol Hill Day in Washington, D.C.

At the age of two, she was diagnosed with leukemia and her first fight began. After beating cancer, she found her love of skiing and started competing on the slopes with Special Olympics Colorado at the age of 13. From there, she joined Unified basketball, swimming, and cycling.

Hanna is passionate about her whole family, including the Special Olympics family. Her faith in God drives her to help her community through inclusion and acts of kindness. Hanna is committed to fueling daily workouts with quality nutrition. She is determined to inspire joy and acceptance while empowering others to be their best selves through speaking engagements, videos, writing articles, and embracing life fully.

As a 2014 graduate of Heritage High School, Hanna was selected to give her high school graduation speech and received a scholarship from the John Lynch Foundation as the “Exceptional Star of the Year.”

Off the playing field, Hanna served as a member of the State Youth Activation Council and became a local Fitness Captain to train athletes on the importance of healthy living. She was also a contributor for ABC Denver 7 News, where she earned a Heartland Broadcast Emmy for her piece titled “More Alike Than Different.”

Hanna’s busy life also includes a service ambassador job at United Airlines and a fellowship with the Global Youth Team of SOI. She is an alumni reporter for Lady Gaga’s Channel Kindness, where three of her stories were published in the Channel Kindness book. She is now managing her own business, “Wholeheartedly Hanna,” which she dedicates to her late brother’s memory. She takes part in the “Trek 100” every year, where she cycles 66 miles in one day to raise money for childhood cancer. When you ask her what her favorite part of Special Olympics is, she will tell you all about the friends she has made and the joy she has been able to share.