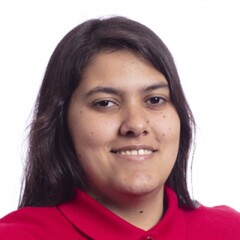 Beyond being an Athlete who has won several medals for Brazil, she currently represents the fight for inclusion using her own voice to uplift the voice of people with intellectual disabilities. Emanuelle (or Manu, as she likes to be called), brought a motto to her life in a sentence that has been the beginning of many projects for Special Olympics Brazil - "Inclusion is Action". For her, it is “useless” to talk about inclusion without experiencing inclusion in practice.

In Brazil, Manu is a dedicated member of the Special Olympics Athletes Council and coordinates the Athlete Leader’s group alongside the program's Board. Through these positions, she encourages the active participation of other athletes in activities and increasingly encourages other athletes to reach their full potential. Manu is also a member of the Municipal Council for Children and Adolescents and uses her voice to represent people with disabilities.

When Manu was 2 years old, she had seizure which left her in a coma for a week. After she went back home, her parents noticed that Manu was acting differently; walking and talking were more difficult for her. The seizures increased in frequency, so doctors recommended not only more therapy, but also moving to a calmer place. Manu´s family decided to leave their home behind and relocate to Rio Das Ostras.

In this new city, Manu’s health and life began to improve notably, especially after her mother, Debora Dutra, became involved with the Associação de Pais e Amigos dos Excepcionais (the Association of Parents and Friends of People with Disabilities – APAE). Manu became involved in sports, and discovered her love for soccer and beach volleyball, training almost daily. This led to her discovery by Special Olympics in 2013, during the development of soccer programs and competitions in Brazil and Rio de Janeiro.

From that moment on, Manu became deeply involved in Special Olympics initiatives; she participated in the 2015 World Games in Los Angeles, where she won a bronze medal in soccer; she also represented the region at the Special Olympics Global Youth Leadership Forum in Baku, Azerbaijan in 2018, along with her Unified Sports partner, Leticia Maciel. There, they lead a project to introduce Unified Sports to students at Leticia’s high school. That same year, she also played in the Unified World Cup in Chicago, where she got a silver medal. Her constant training and competing in beach volleyball also led her to qualify to attend the World Games in Abu Dhabi in 2019.

Her journey as a Sargent Shriver International Global Messenger began with a lot of responsibility and maturity. She had to make the choice between participating as an athlete, as she had been preparing herself for years, or going to Abu Dhabi representing the voice of many other athletes as a Global Messenger. She made the right choice and today she is the great voice of many other Athletes.

In 2019, Manu also had the wonderful opportunity to speak at the United Nations Organization representing Special Olympics Latin America (SOLA). Manu, as a Sargent Shriver International Global Messenger has the dream of being able to do more for athletes, to be able to see them occupying spaces, reaching their goals, being truly heard and included in society. She wants to help more athletes to be in “her shoes” someday very soon.

In 2021, as part of the official trophy design team, Manu helped to create the Unified Cup Trophy used at the 2022 Unified Cup in Detroit, USA, which will be used in all upcoming Unified Cups. She also was invited to give a speech representing Special Olympics International at the Opening Ceremony and to introduce the teams as they entered the soccer field.

“Let's live inclusion in practice! Together we can be much more.”