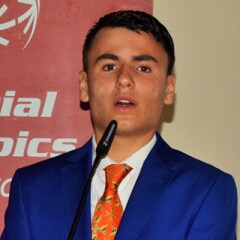 When Gilmour Borg’s speech at the Special Olympics Malta National Games was broadcast on national television, it was the first time he felt counted in society.

Before joining Special Olympics in 2014 he never felt included in mainstream sports clubs. His teammates ignored or made fun of him and he was never understood by his coaches, which made him feel frustrated and alone. This all changed when he joined Special Olympics. Instantly he found what he was looking for and what he needed: acceptance, joy, encouragement, pride, happiness and friendships. His training made him stronger, not just physically but in character, he knew he could now achieve great things in life, on and off the sports field. His first competition was at a National Games in Cyprus in 2015 where he won two gold medals and one silver. The following year he competed at a National Games in Italy and also won three gold medals. Since being trained as a Health Messenger at the 2017 World Winter Games, Gilmour enjoys promoting a healthy lifestyle to his fellow teammates and family members.

“Health is the fundamental recipe to better living and wellbeing,” says Gilmour. “It is important that our bodies get the right amount of everything it needs so we must eat healthy (fruits, vegetables, fish, etc.), and we must drink plenty of water.”

Gilmour recently became the Chairperson of the Special Olympics Malta Athlete Leadership Committee. Due to Covid-19, the committee started to conduct their meetings through Zoom. Led by Gilmour, they created a project to support and inform the athletes of Special Olympics Malta on the importance of being healthy during these difficult times. They recorded fitness videos and created health promotion presentations which they shared via various social media networks. Gilmour continues to communicate regularly with teammates to encourage them to eat healthy and to stay active in safe environments.

Outside of Special Olympics, Gilmour works as an assistant clerk at a Church School. Through Special Olympics, he learned important life skills such as discipline, the ability to obey rules and most importantly to be independent. He believes having these skills enabled him to be successful at his job.