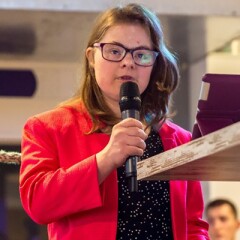 Lize Maria Weerdenburg is a Health Messenger and former Sargent Shriver International Global Messenger (SSIGM) from the Netherlands. She has been an active Special Olympics athlete for more than 20 years, practicing several sports and participating regularly in national and international competitions. Her sports are athletics, speed skating and skiing. Her proudest moments were competing in the Golden Race (100-meter sprint) in Rome in 2006 and at the Special Olympics World Games in Idaho where she won two golden medals and one bronze.

Since 2010, Lize has been an Athlete Leader for Special Olympics Netherlands and she represented Special Olympics Europe Eurasia (SOEE) as a Sargent Shriver International Global Messenger from 2015-2019. She has also been a member of the SOEE Athlete Input Council since 2017.

Lize is very active as a Health Messenger. She has given numerous presentations to schools, universities and companies about the importance Sport and Health. To Lize it is important for everyone to be healthy, especially those with an intellectual disability. Exercise and eating healthy must be a priority every day and she spreads this message whenever she can. Last year, Lize helped to create a fitness app, which has been developed by Special Olympics Netherlands. This app has been the primary training resource for athletes to stay fit during Covid-19. She wrote a column about this topic in the Dutch magazine Down + Up (magazine about Down syndrome) and posted messages on Facebook to encourage more athletes to use the app.

Lize’s tip for every Special Olympics athlete is: Keep on moving, train every day and take care of yourself by eating healthy food. Health care providers working with people with intellectual disabilities must know how to support and advise them on how to improve their health, they cannot do this alone.

Lize has never allowed her disability to stop her achieving great things in life. She has been educated in mainstream primary and secondary schools with extra support. She has obtained several qualifications including a catering diploma and she works in a lunch café. She is married and lives with her husband in their own house.