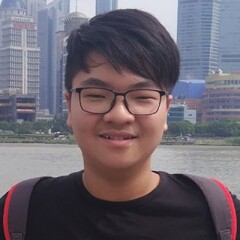 Su Xing “Jack” Zheng, who also goes by Xing Xing, is from Shanghai, China. He is a student in Shanghai Pudong Special School and a Special Olympics athlete who loves floor hockey. Jack’s proudest moment was when his team won the Special Olympics National Winter Games.

Jack decided he wanted to become a Health Messenger to help his fellow students be able to perform at their best at school. He participates in Healthy Athletes and daily fitness training. Jack notes that the Special Olympics Fit 5 has helped him improve his body strength which contributed to his improved floor hockey performance. Jack shares this with his classmates in hopes he can lead by example.

“Since the epidemic began, I have been concerned about the epidemic prevention situation,” Jack shares. “I know that China has made a lot of efforts, and the people of the whole country have been united as one. We will need to form better health habits, actively do fitness and eat healthy, to help boost our immunity.”

Jack is in ninth grade and hopes to enter Zhonghua Vocational School. In addition, Jack likes drawing cartoons and helping others. His future goals are to find a job using his skills after graduation and support himself.