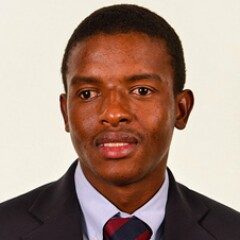 Brightfield is from Botswana, where a diagnosis of intellectual disability can mean lifelong isolation and stigma. He also has visual impairments which led to mockery and bullying in school and elsewhere. He says his only encouragement came from his mother, but she died many years ago. His aunt raised him and helped him through school and then, in 2008, they found a Special Olympics program which, he says, changed his life. Brightfield adds, "It gave me the chance to be with other people of my same ability and see my strengths and overcome my weaknesses. This has also helped me know what to do with people who are teasing you. You realize we all have our different weaknesses-but also have strengths."

Through Special Olympics sports, Brightfield - also known as Brisha - now has many friends. "My athlete friends support me, my coach friends encourage me. It's wonderful." At age 18, he began in athletics - the 100-meter and 200-meter - and won silver at the 2011 World Summer Games in Athens. Then it was on to football (soccer) and volleyball. He is now coaching a unified volleyball team that is training for 2015 World Summer Games in Los Angeles. Brightfield loves being a coach because he can bring the power of Special Olympics sports to more people with intellectual disabilities: "I want to help them build up confidence and accept who they are-just like I did." He adds, "It's changed my life to be a soccer coach who can encourage others - and show them ways to improve and be healthy."

He also says volleyball is an important sport for teaching people with intellectual disabilities discipline and teamwork - more even than football. "With volleyball, you have to know how others work and understand each other. In football, you can do anything - just run, kick and score." He says Special Olympics sports teach athletes so many skills that are important in life.

Currently, he coaches athletes in football at two primary schools. He is also a volleyball coach in his home village of Serowe. He has also gone through athlete leadership training and enjoys public speaking. When he is not involved in sports or working with the athlete leadership council, Brightfield was accepted to the National Service Program where he is employed full time as an assistant teacher at a primary school. He also has a certificate in carpentry and screen prints T-shirts to sell in his community.

As for sports, his goal is to earn more medals - and also for his Unified Volleyball team to win at World Games. He adds, "Special Olympics has opened so many gates for me. I look forward to my team competing in Los Angeles. They will do their best."

Brightfield says he's a different person that he was before getting involved in Special Olympics. "Now, I am a person who believes in myself and also that everything happens for a reason. Because of Special Olympics, I now believe that my disability is an ability - and an opportunity."