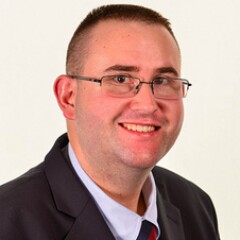 Jason is from Ogallala, Nebraska and he first participated in Special Olympics at the age of fourteen after being encouraged by his High School principal to attend a local bowling practice. From that time on, Jason has been actively engaged in 11 sports total!

He attributes his ability to perform better in these sports to the fact that he has lost 92lbs and has made significant strides to eat healthier and exercise daily. Jason’s self confidence has increased tremendously and he is able to make friends everywhere he goes. Special Olympics has helped him overcome his biggest challenge of being told that he can not do anything and that he can not be independent. His personal best in sports is achieving 280 lbs on the dead lift and 130 lbs on the bench press. Jason has many memorable moments competing in sports, but his most vivid one is the experience he shared with his brother-in-law as they competed in a Unified Golf tournament and won gold. On a weekly basis, Jason travels 120 miles from his small hometown in Ogallala to meet his team in Scottsbluff. Being part of the team and sharing the team spirit makes the drive worthwhile.

Jason leads a very active life outside of sports. He works full time at an Educational Service Unit as a Documentation coordinator and is an active public speaker when he is not at work. He is also a talented photographer with a keen eye for taking capturing landscape pictures. Jason also enjoys singing the National Anthem at Special Olympics statewide events.

“You can achieve anything you set your mind to. Don’t let anyone tell you, you can’t do it!” says Jason.