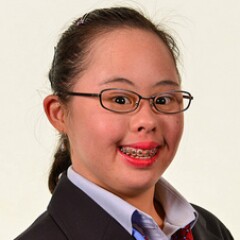 To Stephanie, the athlete oath isn't just a saying. It's a valuable tool for overcoming her greatest fears. When she first joined Special Olympics, her fear of water made it almost impossible to compete in her sport of aquatics. She didn't dare venture into the deep end of the pool and even got sick before competitions. She said, "I am afraid of the water. It is very cold and very deep. I am afraid to drown. I got sick before the competition. But I am always reminded to be brave in the attempt."

Today, she is one of the best Special Olympics aquatics athletes in Indonesia. And while she continues to struggle with her fear of the water, she also continues to overcome that fear by choosing to compete in aquatics. Being involved in Special Olympics has given Stephanie the confidence she needs to celebrate her abilities and pursue her dreams. As an International Global Messenger, she wants to promote health and educate young athletes.

Stephanie is an accomplished athlete, winning gold medals in the 2011 Special Olympics World Games in Athens and the 2013 Special Olympics Asia Pacific Games in Australia, and also is an inspiring leader in the Special Olympics community. As Youth Leader of Athlete Leadership Program, she works with youth, with and without intellectual disabilities, to promote Special Olympics in schools and communities. Stephanie was even chosen by UNICEF and the British Council as the Torch Bearer during the London Olympics in 2012.

When she's not busy with Special Olympics or athlete leadership, Stephanie enjoys playing the piano, cooking, badminton and socializing with her friends. She even owns a laundry business in Jakarta and manages the team of employees as if they were family. Her favorite athletes are Ade Ray (bodybuilder), Susi Susanti (badminton), Ivana Lie (badminton), and Albert C. Sutanto (swimmer), and her favorite celebrities are Giring Nidji (singer) and Ferry Salim (a UNICEF ambassador who she met through her involvement as a torch bearer for the London Olympics).